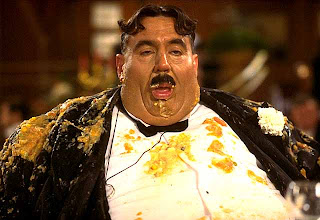 If you ask any halfway sentient estate agent - admittedly that cuts a few out the loop - what they think about the human condition, you’ll get a pretty jaundiced reply. Avaricious, disingenuous, fickle and downright dishonest - and the public are no better.

There’s something about bricks and mortar that brings out the worst human traits. A smarter man than me might link it to some deep primal need to protect the family, have a place of sanctuary; to shelter, light a fire, stave off attacks from malicious aggressors. In truth most people just want to make money.

‘He says he doesn’t care who buys it, just whoever pays the most dosh.’ Informs assistant manager T, hand over the telephone mouthpiece, still not putting people on hold no matter how many times I tell him. We have a potentially pleasing, but equally divisive, three-way fight between punters over a desirable house in a sort after location. Demand outstrips supply here, almost irrespective of market conditions.

‘Have you told him it’s not just about the headline figure?’ I ask T and he glances at me with the sort of look normally reserved for idiot trainee F. Stopping just short of uttering that irritating teenage “Duh?” response, T informs me he’s tried that. They just want to hear the numbers.

Invariably in any multiple-bid situation, one set of buyers are head and shoulders above the others in terms of their position – their proceedability – but the vendors don’t always see that, once the fog of finance clouds the view. A potential buyer, with cash in the bank, and no troublesome chain to collapse on a whim, can be a much better bet than someone bidding several thousand pounds more, if they can just sell their home in time and find a lender willing to believe their lies about income and the last three years trading accounts.

‘Tell him we don’t really want a Dutch auction.’ I whisper, drawn into the cupped mouthpiece scenario myself and not wishing the owner to hear me muttering something unflattering about them. ‘That’s exactly what he does want.’ Replies T, with a shrug of his shoulders.

I can already see this spinning horribly out of control if not handled diplomatically. Of course we want the best possible price for the owner – that’s why he pays us – but if you want any sort of reputation in a town, you need to let disappointed buyers down gently. Maybe find them a similar home to change their perception of the industry. It’s why we’re called negotiators. T will have to tread lightly.

‘Which buyer needs the biggest lump of finance?’ Spits mortgage man M, stomping across the laminate floor, computer screens shuddering under the impact, shards of flaky pastry rocketing from his mouth like multiple culinary Exocets. ‘They can earn us more commission,’ dribbles M. ‘Remember the numbers.’

They will also carry the biggest risk of a fall-through, or a last minute renegotiation on price, I think gloomily, as I realise the conflict of interest balancing act is back again - one that, since the eighties, has been a permanent bedfellow for the corporate estate agent. Someone is going to be disappointed.

‘Are you the manager?’ Growls a voice on the edge of hysteria. T waves an apology through the glass and gives a self-deprecating shrug as he holsters his handset, while the complainant shouts louder and louder, like a soldier crying for a medic. T’s sidestepping ability would get him straight into the England rugby team, but his negotiating skills clearly need a little work.

‘That idiot staff member of yours.’ Shouts the irate voice, timbre rising and falling an octave or two. An almost irresistible urge to ask, which one are you referring to, has to be junked, as I coo something soothing. ‘Don’t give me that bullshit.’ Rails the man.’ Okay, not that soothing. ‘He won’t tell me what the other person offered.’

As gently as possible, I explain that we haven’t revealed his bid to anyone else and we’ll be treating everyone equitably. This slight obfuscation isn’t entirely helped by the sight of M’s mountainous frame wobbling past my window, something viscous sliding down his chins.

I think I’ve lost my appetite.
Posted by secret agent at 11:38 PM

Yes, what is a dutch auction?

Sorry, but it's stronger than I am: sought after location, old bean.

A formal auction is where you come to the room and put your money where your mouth is. Top bidder signs a binding contract and pays 10% there and then. No changing your mind or re-negotiating. No clogs or tulips in sight.
S.A.

A Dutch auction is a descending bid auction. The auctioneer publicly counts down the price and the first to bid wins the auction. They are so called because this is how tulips are/were auctioned in Holland.

More likely, SA is talking about a (first price) sealed bid auction, where bidders give sealed (i.e. private) bids to the auctioneer and the largest bid wins.

Interestingly - or not - under certain assumptions, the expected sale price is the same no matter which of these two are used. This is called 'revenue equivalence'.