Catchment If You Can - Wednesday 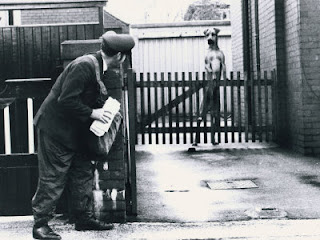 Out on a leaflet drop with trainee F. I feel slightly responsible for his continued employment, battling as I do against the seriously duff cards nature and nurture have dealt the imbecile. But then it’s all down to chance. If he’d been born a girl, had major implant surgery and been prepared to get his kit off, he could have forged a lucrative career selling perfume ranges, writing ghosted bestsellers and chowing down on witchetty grubs in a sanitised Australian jungle. Ho-hum.

‘These don’t often work do they?’ Asks F holding up the last handful of three hundred flyers I knocked out on the computer earlier. Like a glamour model’s autobiography they are sprinkled with a few half-truths, but are largely a work of fiction.

‘You saying Mr & Mrs W with their own house sold subject to contract and two children hoping to get into the school catchment area, don’t exist?’ I ask mockingly.
‘Well I haven’t seen them.’ Replies F hesitantly. And somehow he’s begun to morph, cartoon-like, into a vast-chested parody of a well-known media bimbo, then as I struggle to retain a grip on reality, the breasts remain and negotiator S is suddenly sitting in the passenger seat, open-mouthed.

‘Are you alright?’ Quizzes F, returned and slack-jawed as ever. And I shiver as though someone has stomped across my grave before instructing him curtly to shut his gob, before he catches a fly. God, did his mother teach him nothing? I really should ring social services.

‘They keep us in the public eye.’ I tell F softening a bit, as we walk towards the last few houses in the road. ‘And if one in a hundred gets a response, that’s about the average.’ I glance at the leaflet and spot a minor grammatical error. And now I’m angry with myself, although judging by some of the clumsy sub-Janet and John concoctions I’ve picked-up from opposition agents over the years, my creation is worthy of a Pulitzer Prize.

‘Still not very good odds.’ Grumbles F as he heads up a drive to be greeted by a cacophony of particularly aggressive barking. Better than trying to get a book published, I think morosely, as I tread softly up my own path, and glimpse a vast flickering wide-screen television, through the front window.

It’s one of those cheap replacement UPVC doors, the wretched kind that when you first do accompanied viewings you can never work out how to lock. I struggled for nearly thirty minutes one time before ringing the owner sheepishly. F tends to just leave them open. For the record you lift the handle before turning the key.

‘Oh come on.’ I moan out loud, as the leaflet crumples like a cheap car bonnet, on impact with the aggressively sprung letterbox. These little sods have the pound per square inch bite of a Russian bear trap and will trash junk mail and trap fingers with mechanical glee. And now I can hear reluctant footsteps approaching, as I struggle with the narrow opening like an inept gynaecologist, attempting to deliver something they are almost certainly going to bin before I’ve reached the front gate.

Now, a fresh-faced salesman, one who hadn’t received countless rebuffs, one who still had some resilience, some bounce-back-ability, would stand his ground and hope to engage the corpulent vegetable - who moments earlier had doubtless been watching Jeremy Kyle harangue some chav over a paternity test - in a conversation about their property needs. I just want to run.

Fabricated couple leaflet finally dispatched, I hurry away as a big shadow approaches the glass door panel. I’m pretty sure I left a bit of fingernail behind but I’ll take that as necessary collateral damage.

‘Bloody dog tried to have my leg off.’ Calls F angrily, as I meet him in the road.
‘They teach them to do that if they smell an estate agent.’ I tease, as I blip the car remote and head for the warm.
‘Seriously?’ Asks an incredulous F.

It would actually be quicker to train an excitable poodle than fashion F into a worthwhile employee, and it would probably involve less tail-chasing and dribble.

But where would the fun be in that?

Times are tough, but insinuating that Peter Andre is a witchetty grub is, quite literally, below the belt. You'll have the Jeremy Kyle hoards all over you like F's cheap suit if you're not careful!

This defeats the letterbox spring problem and any stops any nasty little doggie biting your fingers!

Many years ago, around the mid 70's, I arrived as a newly installed manager and inherited a scuffy, bleary eyed junior negotiator who sounds and acts like F. I've lost count of the times I had to send him home to sleep and change having come straight into the office after a night on the tiles. Our relationship lasted about six months.

A couple of years ago the very same guy walked into my office to relate how he had started in small office in S.W. London, grew a chain and sold out for zillions in the late 80's. I still grimace every time I see his name above dozens of glitzy offices.

So never judge a book by its cover, you never know what lurks inside, and like an excitable poodle might just bite you on the bum.