Seasons In The Sun - Wednesday 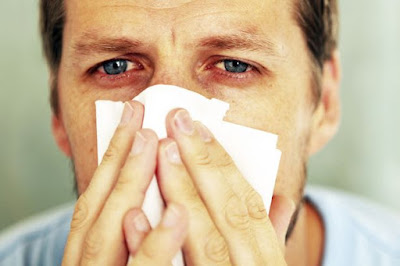 ‘You feeling alright?’ Asks assistant manager T as he becomes the first staff member to arrive at the office - twenty minutes after me.

He doesn’t often sense moods that acutely, until I shout at him or thump the desk in frustration, but I’m guessing he’s noticed my washed out appearance. I’ve been awake, coughing and sneezing since about 4.00am. My eyes are red-raw from rubbing and crustier than a bakery floor.

‘I’m okay.’ I lie wearily.
‘Only it looks like you’ve been crying.’
Terrific. I’ve three valuations today and the sympathy sales pitch never lasts past the moment you tell them how much their home is really worth. The fee discussion is not to be sneezed at either.

‘It’s the pollen count.’ I tell T with an unpleasant sniffing sound resembling a badly blocked drain clearing.
‘Hay fever?’ Asks T with head to one side.
No, another survey the bean counter boss wants to do, I feel like saying sarcastically. Similar to a board count but with more bronchial mulch.

‘I never used to get all these allergies as bad.’ I tell T mournfully. The whole office knows about my reaction to dog and cat hair, never a good ailment when you are constantly entering homes where delusional pet owners think their house doesn’t smell and it’s okay to have felines on the kitchen work surfaces, and canines lying on the bed.

‘Maybe it’s an age thing.’ Muses T, sitting at his desk with a thump and firing up his flatscreen. No chance of making me another cuppa, I think tetchily? The half-full mug beside me has gone cold and I don’t fancy swigging the slightly bitter, grainy dregs of another tepid LemSip  I wonder if you can overdose on over-the-counter snot-busters? There must be cheaper ways.

‘You’d think you’d build up an immunity after half a lifetime of animal hair and tree pollen ingestion.’ I tell T, who doesn’t appear to be listening any more. I thought you could check your Facebook on your phone.

‘Says here the pollen forecast is very high today.’ Announces T. I’ve maligned him unnecessarily. Luckily it wasn’t out loud this time and in any case I’m beyond blushing now - coughing, sneezing and choking yes, but beyond blushing.

I walk across to glance over T’s shoulder just as fat finance fiddler M waddles in to the office, clutching another grease-flecked Greggs bag.
‘Someone died?’ Asks M stopping in front of me.
I raise a quizzical eyebrow and a tear spills down my cheek.

‘He’s got hay fever.’ Enlightens T, as I reach for my last tissue and trumpet a runny venting. Unlike my erstwhile drinking buddy, I refuse to use a linen handkerchief. He’ll happily blow his nose, then dip straight into the communal bag of crisps we’re sharing. I should widen my circle of friends but it’s not easy, being an estate agent.

‘That’s alright then.’ Says M moving away. ‘As long as it’s not one of my policyholders. Reams of paperwork if they croak and I don’t get any renewal commission.’
The property industry took a turn for worse the day insurance companies, banks and building societies started buying up estate agency firms.

‘God, you look awful.’ Says negotiator S, as she comes through the door and glances at me.
‘It’s hay fever.’ Shouts M from his office. ‘He’s not sobbing about the office sales figures.’
‘Have you tied anti-histamine tablets?’  Asks S, waking her computer and also showing no sign of making drinks.

‘I positively rattle with them.’ I tell her grumpily. ‘They are expensive and don’t really work that well.’
‘Like solar roof panels.’ Says T with a hearty chuckle.

Everyone’s a comedian. We’ll see if they’re still laughing when I arrange a leaflet drop for this afternoon. T’s right about the ugly solar slabs though. Not many people want to buy a house with those monstrosities ruining the roofline. Built in obsolescence, in a cloudy country with more rain than the forests we’re supposed to be saving. I sense another mis-selling scandal.

Back at my desk, I check my emails.

I’m going to need another box of tissues.

Download the ebooks - links on the right - you wouldn't want to see a grown man cry.....
Posted by secret agent at 7:35 PM

Hey nice post dude!!! it is really help ful for the buyers who are looking for Property for Sale Hyderabad property for sale Bangalore etc.