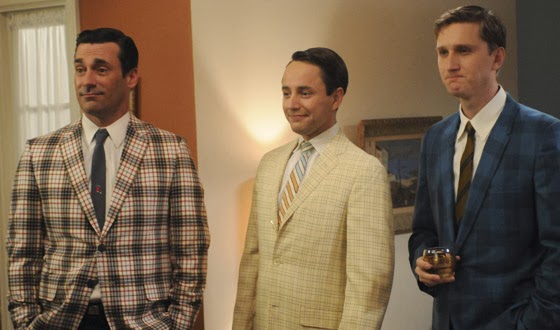 ‘What are you wearing?’ Asks my wife. Sadly it’s not one of those phone sex calls they have in movies and I’ve never received - despite donning my lucky pants so often they’ve become frayed at the edges. I need to change them and the name, it’s a misdescription that might attract the attention of Trading Standards if I applied the moniker to a home.

‘I don’t know.’ I answer gazing in the wardrobe disconsolately. It’s the weekend and my turn on the rota to work. Traditionally Saturday, or my pet hate Sunday working, allowed staff members a bit more flexibility with the dress code. The sort of latitude 1908s yuppy bankers first enjoyed when dress-down Friday’s migrated across the pond from America.

I shudder to think of some of the fashion crimes I committed back then, when my enthusiasm and hair was much glossier. The braces were, obviously, a custodial offence in any enlightened civilisation and the baggy trousers with the turn-ups a look that should never return. I really ought to take then to a charity shop and clear some space in the wardrobe.

‘Half of those suits won’t fit you any longer.’ Suggests my wife unkindly. I glance at my waist and wonder if I’ll make it through until lunchtime, fuelled by the meagre muesli she’s insisting we both eat for breakfast in a display of marital solidarity - and because she has a weigh-in later at fat club.

‘Fashion is cyclical.’ I tell her pulling out a ghastly navy blue blazer with gold buttons and hurriedly returning it in a cloud of dust.
‘Yes, but you’re more cylindrical now.’ She replies grinning. ‘They won’t ever fit again, double breasted is supposed to refer to the jacket.’
She can be quite harsh.

‘How about the sports jacket?’ I ask beginning to lose the will to live and seriously considering donning a weekday suit and wearing that. I can see now why women take so long to get ready.
‘Hold it up.’ Instructs my wife. I lift the check-patterned item, a pricey number that actually cost more than my default Marks and Spencer two piece - extra trousers available for when you inevitably split the crotch.

‘Hmm.’ Says my wife unhelpfully.
‘What’s that supposed to mean?’ I demand angrily, one eye on the bedside table alarm clock. I’ve got a full day of viewings to do and can’t afford to be late. Might just have time to grab some chips on the run though, I think, as my stomach rumbles loudly.

‘Nice jacket.’ Says my homely weekend lady as I hurry through the office door, navy blue trousers snugger round the waist than I remembered.
I look at the fifty-something mother accusingly, searching for artifice, but she only sells homes two days a week and hasn’t picked up too many bad habits yet.

I employed her, and the even older lady who alternates, on the basis she’d be reliable, likely to stick at it and had reached the menopause. Obviously keep the last bit to yourself. So far it’s working out, although training them on the computer system was a challenge.

‘Haven’t worn it for a while.’ I answer, glancing at the office diary and seeing two more viewing appointments have been shoehorned in.
‘I can see why.’ Sneers lettings lush B, from her cluttered desk. She’s about as happy to be in as I am, but at least I’d pass a breathalyser.

‘Are we the first to see it?’ Asks the husband as I fumble with the flat keys then drop the bloody things. The ripping sound as I stoop echoes round the landing

Depends which angle you look from.