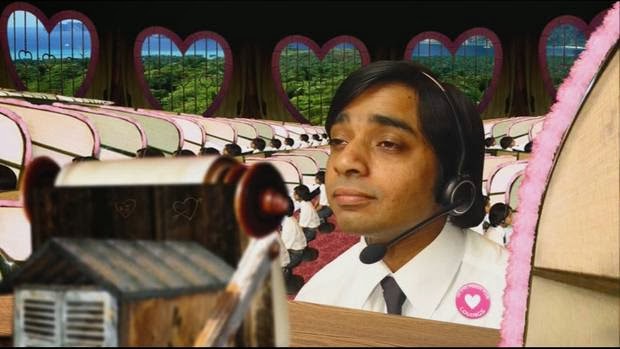 ‘It doesn’t look as bad as you painted it.’ Says trainee F as we pull up outside a 1980s built block of retirement apartments. I’ve brought F along to help measure up, an old habit I can’t shake from the days when you needed someone to hold the end of a tape measure if you didn’t want to keep trying and failing to attach the sharp end to a door handle, or skirting.

I now have a new generation laser measure, the early adapter versions were about as accurate as hawking down a well and guessing the distance when you heard spittle strike water. F is basically redundant, something I’ve been striving to engineer for some time as it happens. Despite the buffoon being, strictly speaking, surplus to requirements it does help to have two pairs of eyes on a new instruction. If I’m out of the office at least F can tell a prospective buyer what the property is like.

‘That’s the illusion they sell the old folk,’ I tell F as I pull into a parking bay marked Strictly Authorised Visitors Only. ‘They also think they’ll have lower overheads and a staff member on site to look after them if they’re unwell.’ I continue sourly. Personally, I wouldn’t want to die in one of these soulless shrunken square footage caskets but someone just has - so we’re here to try and sell it.

‘When they first started marketing this concept back in the late eighties, they were all the rage.’
‘Wow.’ Responds F. At least he’s taking information on board now, then he adds woundingly.
‘I wasn’t even born then.’
You might die earlier than expected, I think angrily, as we exit the car and I glance up at the bland red brick four-storey elevation and see half a dozen sets of net curtains twitching. The eyes may be old and rheumy but they still need to see if the men in suits are estate agents or undertakers.

‘We’re meeting the manager,’ I tell F as we head for the communal entrance. ‘They used to be called Wardens when they first started the concept and if you ask me it was more accurate.’
‘Why’s that?’ Replies F. Sometimes I feel it’s me who is on a life sentence. It would be quicker to train a chimp.

‘Just keep her sweet.’ I hiss to F as I press the buzzer. ‘They can make or break a sale.’ An officious sounding female voice echoes through the speaker grille and I present my credentials. She doesn’t sound that impressed but the door vibrates and I grab the handle, nothing worse then missing the electronic release and having to buzz again.

‘I have a list of people interested in coming to the block.’ Says the mid-fifties woman condescendingly as we exit the lift and walk along the indentikit corridor, resembling a downmarket budget hotel chain that will remain nameless. Worryingly, when the sheltered retirement flat concept first started fifty-five was the minimum age to qualify for ownership. It’s not that far away for me and it would take at least three more decades and a loss of marbles before I’m ready for an overpriced box - unless it’s supplied by the funeral director, in which case it won’t be my problem.

‘It stinks in here.’ Says F after the manager has left us in the cramped one bedroom unit, with dingy little kitchenette at the rear of the tiny lounge. The room is crammed with large unsuitable oak furniture clearly from a much bigger house and the carpet has some unpleasant looking stains. I don’t like to tell him, so push open the window to a buzz of road traffic.

‘The ground rent is high and the service charges escalate horribly once you are in.’ I tell F as we squeeze into the minuscule bedroom. ‘The developer often owns the management company and use it as a cash cow.’  I regret the phrase immediately.
‘So what’s a cash cow exactly?’ Questions F.
‘Something you milk.’ I tell him as he spots and absently tugs an orange pull cord.