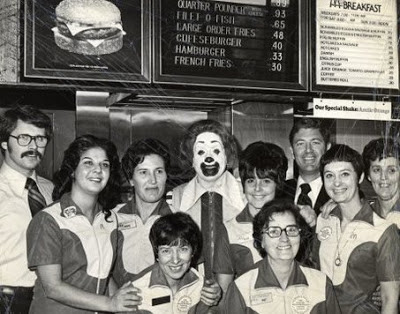 ‘If I see another f***ing PowerPoint presentation I’ll top myself.’ Hisses my vertically challenged rival manager H as we settle into another bland hotel meeting room and the bean counter boss unfolds his laptop.
He has a point. The graphic of the be-suited man climbing some sort of snakes and ladders sales mountain had a certain novelty value about a decade ago, but now I just long for an old-fashioned overhead projector and a couple of acetates. Maybe even some A4 handouts.

‘The first and last refuge of the terminally dull presenter.’ I tell H, as I sit reluctantly next to him after missing out in the unseemly scrabble to be seated by the new and smoking hot female manager, who is having some early sales success in an office where the last incumbent spent more time downing measures, than measuring up.
‘She won’t last long on top.’ Sneers H, conjuring up a vision I have trouble shaking, until the eastern European girl with the embryonic moustache and the unflattering nylon housecoat turns up, with pots of stewed tea and coffee strong enough to strip the enamel from your teeth.

‘She’s producing some good instruction figures.’ I tell H, pouring a dark and suspicious smelling brew into the already stained cup in front of me. And I look at my new colleague and give her, what I judge to be, a companionably but in no way salacious smile of encouragement. She smiles radiantly back and I realise why she’s getting quite a few sole agencies with boards - at least from the male vendors.
‘It won’t last.’ Gripes H ungraciously. ‘They always get hormonal or pregnant once the first flush of enthusiasm goes.’
He really is a whole heap of chauvinistic unpleasantness for such a small package. It really irks me his office outperforms mine, ten months out of twelve.

I watch the bean counter as he fiddles with his tracker pad and tries to line up the first image, one his secretary probably prepared for him, with the portable projection screen. Despondent, as I imagine scores of slides a ten year old would be ashamed to produce flashing before my eyes for the next ninety minutes, I look at the pile of dusty Imperial mints in the saucer in front of me and wonder how long it would take to overdose on sugary spheres?

How did I get here? Asks that annoying inner voice, one that grows in intensity with each passing year and each newly increased sales target. A salesman’s career is finite, like any other, but unlike say, a doctor or lawyer improving with the accumulation of age and knowledge, estate agency is essentially a young man’s – or woman’s – game. There are only so many late night viewings and valuations you can do with utter wasters before you start to lose that youthful enthusiasm. Next time round I’ll definitely pay more attention at school and try not to grow up in a dysfunctional family.

‘Financial service performance is far from acceptable.’ Drones the bean counter, as I begin to yearn for the temporary high of the soggy bacon butties that we’ll be having at the comfort break. I already have virtual indigestion, the physical version might as well accompany it once the industrialised white baps and water-pumped bacon arrives. When the absurd, Americanised, breakfast meeting idea arrived on these shores, it seemed radical and not a little exotic. But budget cuts soon ditched the full English for poor man’s transport café fare and the realisation that the whole charade of shared sustenance and team-building was just an excuse to get you out of bed a couple of hours earlier, and back in the office before opening time.

‘I hate clapping for someone else.’ Gripes H as I think welcome to my world short-arse. The pretty new manager has just collected a bottle of cheap bubbly and the embarrassingly naff, new instruction performance cup. At least she has the good grace to blush – it will soon fade.
‘We’ll see if the bitch has sold any of them next month.’ Says H poisonously.

The Imperial mints are rattling around in the car coin tray. Not sure I’ve stolen enough.

Property market giving you indigestion, get the cure here:

US Readers: http://amzn.to/vXpFJf
Posted by secret agent at 8:18 AM