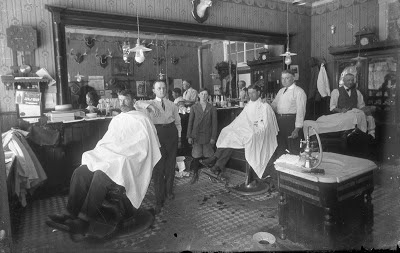 With a cancelled appointment and hair just beginning to bother the ears, I bowl into the barbers without checking the clientele through the window. Too late, I see there’s a bench full of customers waiting and worse still, one of them is a rival estate agent. Spotting my indecision and not wanting to lose a punter, the owner gives me a smile, worse still remembers my name and beckons me to sit with an optimistic.
‘Wait won’t be long.’

It’s a good skill with the name, one I wish I could master, but I recall properties not people after all this time. The barber knows I don’t like to discuss business when in the chair, not least because he’s tried to move several times over the years and you don’t want to upset a man with a cut-throat razor in his hand and an interest in how much his home has gone up in value in the last twelve months.

The luxuriantly haired oily operator from the opposition outfit shifts up grudgingly and equally reluctantly I park my backside next to him. He’s reading a free copy of The Daily Mail, so his political persuasion is fairly clear. ‘Alright?’ I ask with no interest in the answer, unless his office is about to close.
‘Can’t complain.’ He replies, before adding unnecessarily. ‘On a bit of a roll at the moment actually.’ So he’s a liar as well as being freakishly hirsute.

I check out the other customers. The dusty bloke with three days stubble and workman’s boots is scanning The Sun without any apparent embarrassment, and the hippyish mid-fifties man with grey hair, a goatee and an absurd ponytail, is glued to The Guardian. All political persuasions catered for by the astute owner. Just hope nobody wants to talk property. Fat chance.

‘You short on stock too?’ Asks my rival with the plentiful locks. There was a time when my hair had that sort of lustre and grew thick and dark. Too many sales falling through and too many targets being ramped up annually have taken their toll. Now when I give my instructions to the trimmer it’s, ‘just a tidy up ’ and a hopeful, ‘and leave some length on the top please.’ Not much they can do about the grey and I steadfastly refuse to dye it like those fading lotharios trying to hang on to their second Thai wife.

‘We’re doing okay.’ I fib. It’s a tradition amongst sales people to over-inflate their performance and it’s not about to stop when quizzed in public.
‘You two alright to sit next to each other.’ Jokes the barber as he brushes down his just finished customer and the man tips him more than I usually do. I frown and reconsider any sort of gratuity this time. He remembers my name but not always my preferences.

‘Sorry.’ Says the barber ushering in the man with the ponytail who it turns out only wants his absurd facial hair trimmed. ‘I forgot you estate agents like to keep a low profile out of the office.’ There’s a rustle of papers being folded and the whole shop looks at the pair of us with ill-disguised distaste.

‘Go on then you lot.’ Challenges the Sun reader curtly. ‘Tell us why people like me are priced out of the market.’
‘Market forces mate.’ Says my rival clambering into another just vacated chair and getting the young, well-endowed girl hairdresser all the blokes like to use. Not sure if she means to keep brushing you with her tits when she leans in but she gets good tips, and at the end of the day we’re all selling something – unless you’re a civil servant.

I realise everyone is looking at me, now my rival is occupied with whispering his preferences to the girl.
‘Supply and demand tends to drive the market.’ I venture, adding. ‘That and availability of funding.’

‘Too many bloody immigrants and freeloaders.’ Interjects a well-spoken man clutching on to The Telegraph and an image of a country that no longer exists. The Sun man wades in, the hippy with the trimmed beard adds his opinion and I wish I were bald.