Back In The Doghouse - Wednesday 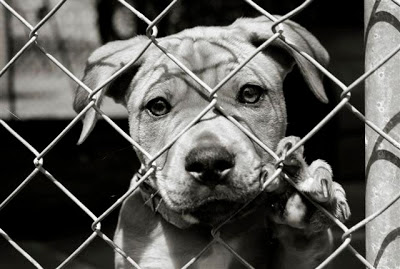 No sooner have I rung the doorbell than the frantic barking and scrabbling of paws on parquet begins. Behind the glass panel I see a huge hound bouncing up and down with excitement at the thought of biting – or at least slobbering – over a man in a suit. Great.

Now, we had pets when I was a child, dogs and a cat, but now I detest the creatures with a vengeance. They shed hair on your clothes, dig their claws in when the owner isn’t looking and invariably try to shag your leg. And the owners wonder why the house won’t sell? No matter how much they are is in denial, the house will reek of dog, or cat. The litter tray in the kitchen doesn’t exactly help viewings either. And my pet hair allergy just seems to get worse with age.

‘Get back Buster.’ Yells a harassed female voice as a shadow appears at the door and stoops to tug on, what I hope, is a very robust collar. I can already feel my eyes beginning to water and the first sneeze can only be minutes away. Nothing worse than trying to get a sole agency form signed with drops of snot leaking from your nostrils, on to the paperwork.

‘Who is it mummy?’ Calls a young voice and my enthusiasm falters further. Surely it can’t be half term again?  It’s not, as becomes apparent as the door is opened to a stressed looking lady in her late thirties struggling to hold on to a vicious looking mutt that if it isn’t on the dangerous dogs list, bloody well should be. The hound is looking at me as if I’m one of those cartoon steaks in a butcher’s window. It’s dribbling some sort of pre-rabid froth from its mouth. In common with the public, it seems dangerous dogs don’t like estate agents.

I make my introduction warily, as the dog strains at the collar eyes alight with bloodlust while the owner of the younger voice reveals herself. The little girl is clad in pink pyjamas that might be My Little Pony, or some sort of Barbie princess line – I have boys and girls are a mystery to me – and she’s clutching a fistful of tissues. Her eyes are red and she already has a trail of mucus sliding from her nose, before me.

‘Who is that man?’ Asks the virus-filled brat, coughing in my direction, as I imagine the millions of spores spiralling across the hall looking - like the owners – for a new home.
‘The estate agent Emily,’ replies her mother wearily. ‘I told you to stay in bed.’ The woman turns to me with an apologetic shrug. ‘Sorry, she’s off school with a cold so I thought it would be a good time to get you round to value the house.’ I’m beckoned in to the warm fug of cold germs and doggy smells. I feel a tear welling in my eye.

‘What does an estate agent do?’ Quizzes Emily with a phlegm-filled persistence. It’s a question I’ve been asked a thousand times. Often when we’ve arranged a quick sale and the vendor is fussing about the fee. You wanted me to sell it and now you’re complaining I’ve done my job Sir? Got to love the public.

My initial pitch and confirmation of the lady’s requirements over, we embark on the tour of the house, dog and little girl snapping at my heels. Not sure which one will bite me first, or which will be the more infectious. Upstairs we troop into the master bedroom and the mutt bounds free from the owner’s hand and attempts to push me on to the bed. It’s not the first time a dog has tried that move, but that’s another story.

‘Get down Buster.’ Screams the woman in a voice that could crack crystal. The dog ignores her and jumps on to the bed and sits panting, watching me warily and depositing drool onto a grubby-looking blanket on top of the duvet.

‘He’s not supposed to sleep on the bed.’ Says the woman, with a shrug. ‘But he’s a big softy really, so we let him if he’s feeling down.’

Room for one more?

US Readers: http://amzn.to/vXpFJf
Posted by secret agent at 6:34 AM

Fantastic finish to this one