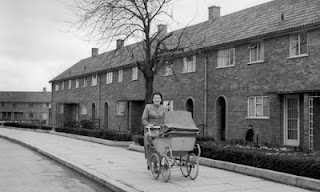 ‘This is a pretty crap area really isn’t it?’ States trainee F as I weave the company car in and out of ageing Fords and Vauxhalls parked half on the kerb, half on what’s left of the grass. I hesitate to point out to him that this may be crumbling ex-local authority housing stock but the prices are still way out of his reach.

We’re on our way to measure up a voluntary repossession, the keys and instructions from the lender nestling in my briefcase. At least I know the outgoing owners will be long gone this time, it’s when they are still inside it gets messy. A scruffy brace of teenagers, hoods raised, look at us menacingly as I slow to walking pace to ease between a huge flatbed 4 x 4 and a rusty Citroen Saxo with more differing coloured panels than Joseph’s Technicolor Dreamcoat.

‘How come some houses have all new windows and roof tiles and some are all rundown?’ Asks F pertinently, as I spot the 1950s built semi in question. As if to underscore F’s question, the house we’re about to enter is scruffy, with the exception of a low-level picket fence to the front and a naff-looking windmill, while the adjoining home has updated UPVC and tiling.

‘The next door place is still owned by the council.’ I tell F as we clamber out of the car and I feel several pairs of eyes watching from behind net curtains. The dislike is almost palpable. At least if they key the car it’s not my long-term problem.
‘So they are actually in better nick than the one’s people bought?’ Questions F, brow furrowed.
‘Often.’ I tell him. ‘The people with mortgages can’t afford the upkeep.’
F shrugs and stands aside for me, his bovine brain clearly working on another question more rickety than the gate he’s just opened.

The house is typical of the era. Open-plan front garden, no garage, hence the on-street parking issues. To the side, is a narrow, wire-fence-bounded walk-through to a concrete shed, once for coal, more often full of bikes and rusty prams now.  We stop outside the front door. A door I now open with the shiny new set of keys, as I wonder if the ex-tenant, now ex-owner, regrets exercising their options.

‘So this was, like, one of those right-to-buy jobs then?’ Asks F uncertainly, as we check out, first the cramped under stairs cloakroom, with the temperature of a morgue, then the through lounge/diner to the rear kitchen, fitted with a cheap-looking DIY kitchen units, not quite level. A tap drips mournfully as I glance at the 100-foot garden, wildly overgrown, with the odd discarded push-along toy rising from the grass like some avant-garde entry at the Chelsea flower show.

‘Yes.’ I tell F as I unpack my clipboard and begin scribbling my notes on autopilot. I know the floor plan by heart and could probably guess the measurements it wasn’t for fear of prosecution under that pesky Property Mis-Description Act.
‘It was a mixed blessing.’ I tell F as I continue to jot down the home’s particulars and wonder how I’ll get a decent picture without using PhotoShop.

‘So they all just turned a big profit then moved on?’ Asks F, as we make the upstairs landing and I see the cramped third bedroom and undersized bathroom, and then check out the two bigger bedrooms, both with cheap louver-fronted fitted wardrobes, circa 1970.
‘Those that didn’t run out of money and couldn’t make the payments.’ I tell F.

‘It was that women who invaded the Falklands that done it, was it?’ Says F, throwing me briefly, until I realise he’s talking about Margaret Thatcher. Sometimes I feel really old. Ignoring F’s tenuous grasp on history, I tell him that, as with most things in property, there are winners and losers - and no easy solutions.

‘So this place will be cheap then?’ Concludes F when we are back out by the gate and I’ve taken several snaps, none of which will hide the obvious without artifice and a risk of prosecution. I tell him my suggested number and he almost chokes.

You can buy though, All-new property e-book for the price of a coffee

Very good. So much that is wrong nicely embedded in one succinct blog post.

Meanwhile RBS post another £2bn lost just for the first half of the year and are being flooded with cheap 'funding for lending' money and threats of full nationalisation if they don't lend more.

At what point does the country go bust or a revolution take place I ask myself? Certainly before house prices are allowed to fall. Indeed, as per your article, I fully expect the houses to fall down before the prices do.

Right to Buy; a great short-term vote-winner whilst decimating our council stock and lining the pockets of LLs via increased Housing Benefit payments.

More were actually sold off under New Labout than the Tories; not that it makes the blind bit of difference.

Shapps has promised to replace like-for-like with proceeds from RtB funding replacements. The flaw in this plan is that, in some places in the UK, it would take 1.6 homes sold-off to fund a replacement.

The irony is that F's probably one of the more better off youngsters out there - a job {albeit as a trainee estate agent ;-)} and presumably no university debt dragging him underwater even before he starts his career.

How do his elders think his generation can pay the prices they are demanding for their property? Glad he thought the asking price was vomit inducing...