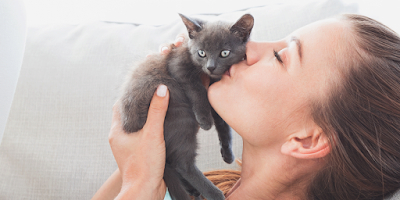 ‘Why am I coming along, boss?’ Asks trainee F, as we pull-up outside the neat, turn of the 20th century, terraced house.

‘To help measure up.’ I offer unconvincingly. Since they perfected digital tape measures by adding a laser pointer - early sonar-based efforts tended to tell you a small lounge was the size of the Albert Hall - there really is no need for someone to hold the end of a tape measure.

‘And you know it’s aways useful for more than one person in the office to have seen inside a house.’ I add hurriedly. F looks unconvinced. My statement is true but even F, with the intelligence of a cranially-challenged goldfish, senses an ulterior motive.

‘Ok, fair cop.’ I tell him as we move to leave the car. ‘They have a cat.’
F frowns at me. ‘So I’m some sort of decoy.’ He surmises, not inaccurately. ‘I just want you to keep the little hairball away from me and distract it while I get the sole agency form signed.’ I tell him.

I dislike cats with the sort of passion only a small flightless bird could muster. They like to torment me in a similar way, sensing I’m not a feline lover the selfish little flea-bags gravitate towards me like magnets. And they make me sneeze. No matter how many pills, potions, nasal sprays or liberal applications of Vics vapour rub I try before visiting a home with a cat, I’ll be wheezing and dribbling snot before I’ve sat on the sofa - the invariably hair-covered sofa.

‘Nice to see you again.’ I fib, as I shake hands with the owner and get the first whiff of pampered pet. They’ll tell you their homes don’t smell, but trust me, I go in more properties in a week than most people will live in in a lifetime. Dogs smell worse, but cats pong too and at least a dopey labrador tends not to walk along the kitchen work surfaces five minutes after ripping the head off a fledgling sparrow.

‘Would you like a cup of tea or coffee?’ Asks the perfectly pleasant lady owner - if it wasn’t for her moggy myopia. F moves to answer in the affirmative but I manage to kick his shins sharply and answer in the negative. It would just mean sitting even longer in the fluff-filled air and sipping out of mugs the cat has probably rubbed its privates over as it patrols the kitchen drainer looking for food.

Details taken as quickly as protocol will allow we adjourn to the lounge. I look at the seating warily, it all has signs of shed fur and I’ll be filling with phlegm before my suit trousers have touched down.

‘Do you mind if I sit at the dining table?’ I suggest, hoping the hard-covered chairs will be less of a hairy allergy pit. The owner offers no objection and I direct F to sit in one of the comfy chairs while I do the paperwork. I can already feel my throat constricting, then as I try not to sniff like a cocaine-raddled Sloane, I see the ghastly creature slinking through the door. Please go for F, I think, eyes beginning to water.

‘Oh here she is, the little darling.’ Trills the woman, transformed into a cooing five year old who has just been given their first doll.
The snot-bomb looks at me with unforgiving eyes and heads straight for my lap, ignoring F completely. F**k off you ghastly bird murderer, can’t you see I hate you.

‘Oh she’s taken a liking to you.’ Says the woman, as the cat jumps firmly on to my lap and I just restrain myself for violently shoving it back down. I can feel the claws gripping through my trousers. It knows, it bloody knows.

‘Are you crying boss?’ Asks F, when we are finally back in the car.

Hey,
I have read this article. your information is really amazing.
Thanks for sharing information.
Great Work!
Keep it up!
Look at our:
Real Estate