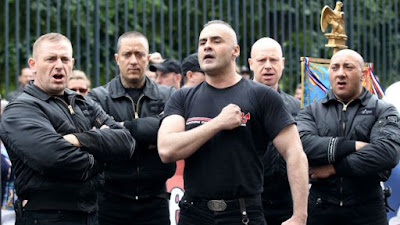 ‘Oh deep joy.’ I say, visibly drooping.
‘What?’  Questions my wife. ‘It’s only a bit of gardening. It will make a change for you to do some hands-on work.’

I’ve been press-ganged into shrubbery cutting on my weekend off. Working alternate Saturdays for a lifetime, hasn’t been my greatest love but it does mean I’ve often managed to swerve some of those traditional manly jobs involving wrenches, power tools and remembering whether it is righty-tighty, lefty-loosey - or the other way round.

‘Anyway I do a lot of hands-on.’ I grumble.
‘Not that I’ve noticed.’
‘What’s that supposed to mean?’
‘Let’s just get cutting.’ Says my wife. ‘We can do a couple of trips to the tip over the weekend, then.’

And that’s why I was complaining. Now I’m all for penguins not choking on plastic bottle tops and I’m right there with the next man in ensuring Polar Bears don’t run out of ice - as long as they remain on someone else’s continent. But the misery of a trip to the Municipal Tip is unsurpassed. Overnight, when people began to recycle and separate rubbish into different colour-coded bins, the staff at the local tip became neo-Nazis. I believe the French call the town dump a dechetterie, which seems about right, as it’s a shitty experience.

I see the little Hitlers, in hi-viz jackets watching me even as I open the car tailgate. They also watch little old ladies struggling with bin bags bigger than they are, but never move a muscle to help. I’m guessing health and safety - or bone idleness.

‘What you got there?’ Demands a particularly ratty-looking operative, as I struggle with a defunct set of full-length blinds we no longer need. Yes, my wife has decided that as we are going to the dump, not only are we going to dispose of the thorny-cuttings that have made my arms look like I’ve gone twelve rounds with a tetchy tiger, but we can ditch all the other detritus clogging up the garage that never houses a car.

‘Metal.’ I say, heading for the appropriate giant bin. I’ve identified it as the most likely deposit-point, as its not general waste, green biodegradable garden mater, paper, cardboard, or approved plastic suitable for processing (check local providers for re-cycling suitability).

‘Nah mate.’ Says the camp guard, holding up his hand like a scruffy traffic policeman. ‘That’s got fabric.’
Yes it has. Well done Sherlock. Those are the bits that keep the sunlight out and helped the product  get its name.
‘So, general waste?’ I say, not entirely confidently.
He looks at me as if I’m the one smelling of rotting fish.
‘Not with metal on it.’ Counters captain Haddock disdainfully.

‘So you had to detach each fabric panel before you could dump them separately’ Laughs my wife as I tell the tale. ‘Maybe he just realised you were an estate agent, saw the sticker in the car window.'
‘I took that out.’ I tell her grumpily.
‘Probably just as well.’ She says giggling. ‘Nobody loves an estate agent - oh, apart from me.’ She adds hurriedly, and not entirely convincingly.
‘It’s not funny.’ I snipe. ‘They were even checking the green bags to see what sort of cuttings I was ditching.’
‘You’ll know what do to tomorrow then.’ She says slyly. ‘There’s two more big bags of garden waste to go.’

There’s a queue right out to the road on Sunday and I can feel my temperature rising. After ten minutes of gridlock I decide to sweep into a space outside the gates and walk the bags in.

‘No mate.’ Calls an angry voice as I unload. Well he’s wrong already, I’m no mate of his.
‘Can’t do that,’ says the SS trainee. ‘Got to drive in.’
‘You’re not serious?’ I spit back angrily. And the jobsworth points to a camera on a pole. ‘We’re watching you. Evidence.’

After the event, I think of a vitriol-laced diatribe demanding if I now have to sort deciduous, from evergreen before using the appropriate garden waste bin. But in actuality, I do a three-point turn and rejoin the queue. At the back.

You can see why people fly-tip.