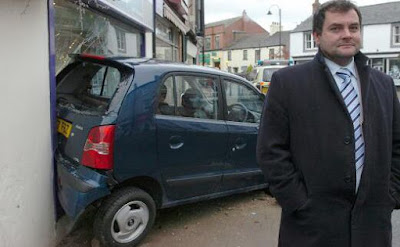 ‘Have you seen the cut-price cowboy’s window?’ Asks assistant manager T, when I arrive back from another bitch-fest of a managers’ meeting. He’s caught me unawares, as usually I’m the first in and take advantage of the early hour to check out the oppositions’ window displays. It’s old-fashioned I know, as most people snoop via the internet, but old habits die hard.

‘Surprised you’ve actually looked.’ I say, a little churlishly. T can be more laid back than an ex-pats sun-bed, but perhaps he’s finally showing a flicker of ambition.
‘Couldn’t miss it.’ Replies T. Perhaps not.
‘Why?’
‘There’s a big board across the main window, looks like someone took a disliking to them and smashed it.’

‘Is that why you are late in?’ Asks loose lettings-lush B with a smirk.
‘He had a managers’ meeting.’ Says negotiator S, supportively and she knows all about support.
‘He could have bricked it last night.’ Suggests T, with a chuckle.
I did brick it last night, but that was only when preparing my figures for the breakfast meeting grilling. Financial services sales were way below target for the month and I knew I’d be in for flack from the bean-counter boss. Once a figure-fiddler, always one.

‘Probably a disgruntled buyer.’ Says S.
‘Or seller.’ Offers T.
‘Or pissed off tenant.’ Says B.
Everyone looks expectantly at morbidly obsess fiancé man M. ‘ What?’ he demands defensively.
‘Well you were responsible for PPI sales to a shed-load of people who weren’t eligible for a pay-out.’ presses, S.
‘That was an admin error.’ Says M.
‘Like endowment mortgages and accident sickness and redundancy policies for the self-employed.’ I say, with a chortle.

‘Oops.’ I say as the door trembles in it’s frame.’ M has stormed off, narrowly failing to shatter our front window. Fortunately, in this business I have a glazier on speed-dial.
‘You pissed him off.’ Says S, with a winning smile.
‘Where do you think he’s going?’ Asks trainee F.
‘To ring the bean-counter, probably.’ I say wearily.
‘I was thinking McDonald’s and some comfort eating.’ Says T.
Either way, I’m expecting a bit of a stink later.

‘What is it with people and estate agents’ windows?’ Asks S, after we’ve all settled with a mug of tea and the phones have gone quiet.
‘Easy target.’ Says T.
‘Well, moving is the one of the top three most stressful events in someone’s life.’ I say, reminding them of the well-quoted statistic. ‘And if it all goes pear-shaped….’
‘…And one in three deals do.’ Chorus S and T in unison, prompting congratulatory high-fives.
‘…well then, you can see why people get angry and the first person they blame is the estate agent.’ I conclude.

‘I reckon it’s just as likely to be another estate agent who stuffed a paving slab through that bunch of shitesters window.’ Suggests T. ‘They undercut me on commission twice last week.’
Everyone looks quizzically at T.
‘No, I didn’t do it.’ He clarifies, hurriedly.
Inside I’m a little disappointed, but then I have been for years.

‘That’s the problem with the on-line operators.’ Says S.
‘Call centres you mean.’ States T.
‘Yes, there’s no physical presence, nowhere to go in to for help and advice, no human face.’
‘No window to break.’ Says T, shaking his head ruefully.
He still didn’t do it. Sadly.

‘Yes, but it’s not only their window is it?’ Continues F, nodding up the high street to where our cut-fee competitors lurk. ‘You always hear about cars going through estate agents’ windows.’
‘That’s just old codgers with automatic cars, who shouldn’t be driving.’ Says B. ‘ If I upset one of my landlords they’re not about to stick their Range Rover through the display.’

F is stupid, admittedly, but he has a point, I don’t have the statistics but I’m fairly sure I’ve read a disproportionate number of reports detailing cars ploughing through property purveyors’ windows over the years. It’s as though people don’t like us….

‘There’s the glazier’s van.’ Says T later, as the well-known company drive past, huge slab of replacement plate glass mounted down one side.