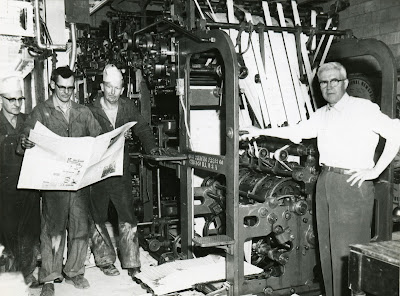 ‘Some reporter from the local paper rang while you were out,’ says negotiator S as I bustle through the office door. ‘ Wants some quotes about the property market.’

‘It’s f••ked.’ Suggests assistant manager T, with a sneer.
‘Swear box.’ Says S, admonishingly.
‘Alright, it’s screwed.’ Continues T. ‘ Too many people, not enough houses being built, overpriced new homes when they do sling them up and a load of Nimbys complain whenever someone wants to built on a bit of crappy common land that they use to let their dogs shit on, without scooping.’

‘Wow. Who pulled your chain?’ Asks S.
‘Every tosser and time-waster that comes though the door, pretty much.’ Concludes T, heading for the kitchen. And I thought I was the cynical one.

‘Did you tell the hack I can’t give quotes without running them by head office, any more?’ I ask, S.
‘Well I wasn’t sure if you would want to speak to them.’
‘The paper, or head office?’ I ask.
‘Either.’

To be honest I’m surprised the local rag is even printing still. When I first started they had a huge circulation and a vast property pull-out, every week. But since people started getting their news and property porn, for free on-line, the paper has been in terminal decline. As a wannabe writer I should be  saddened, but in truth they shafted me for years with over-inflated advertising rates and a virtual monopoly they rinsed relentlessly. I hoped that would all end with the rise of on-line platforms, but like a hooker who swapped pimps, I’m still getting used - just by another abuser.

‘You could tell him the rental market is still strong.’ Suggests B from her lettings desk.
‘Until the government meddle with it and start altering tenancies in favour of left-wing wasters who don’t like being evicted when they trash the property and spend the social money on fags and drugs, instead of the rent.’ Says T, popping his head round the corner. The kettle is starting to rumble but he’s already at boiling point.

‘Maybe you could suggest what the politicians could do to start solving the housing crisis.’ Says S, sweetly. She has more faith in me than I do.
‘They wouldn’t listen.’ Says fat finance man M, joining the conversation. ‘They are only interested in short-term posturing and legislating for idiots who whine when they’ve made a bad investment.’
‘Like an endowment mortgage?’ Asks S, pointedly.
‘That wasn’t my fault.’ Responds M, with a jowly pout.

‘Are you going to talk to the reporter?’ Asks T, returning to the office clutching a steaming mug. No sign of making one for anyone else.
‘What’s the point?’ I say, semi-rhetorically. ‘ By the time I’ve got a response from one of those jobsworths at head office, the paper would have gone bust. Either that, or any comments would have been so heavily redacted it will look like an affidavit from Richard Nixon.’

‘They could do with a few people like you on a housing committee.’ Persists S. They couldn’t. ’People with years of industry experience who could make them understand how the property market works.’
‘Those wastrels wouldn’t listen.’ Sneers T, slurping his tea loudly. ‘ And most of them are gone by the time the shit hits the fan. They are too busy fiddling with their expenses and their interns.’

‘Is there something you’re not telling me?’ I ask T. His head sinks.
‘The Richardsons’ chain broke when you were out, ‘says T flatly. ‘Bad survey, massive down-valuation and the first time-buyers at the bottom have decided to go backpacking instead.’

‘F••k!’
‘Is that a quote for the paper?’ Asks M, with a wobbly-bellied chuckle.
‘Swear box.’ Says S, nodding towards the over-used tin container.
‘Can it be saved?’ I ask desperately.
‘Old news,’ says T. ‘ Seems it happened last week and both solicitors involved neglected to tell us.’

Nobody would print the next bit.