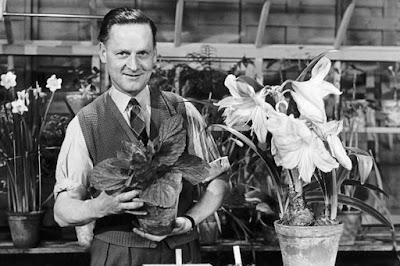 ‘Got a valuation for you after lunch.’ Announces assistant manager T, as I come back to the office. I raise an inquisitive eyebrow.
‘What?’ Asks T.
‘You didn’t want to do it yourself?’
‘More your age demographic.’ Answers T. ‘Thought you’d have things in common, form a bond, get the business, that sort of thing.’

It’s a theory. I do try and send the right person for the right job wherever possible, matching the younger punters to our fresher-faced staff, the older clients who want experience and a few grey hairs to myself and the gay couples to the prettiest staff member of the same sex. Only, I can’t help feeling T is just being lazy again. You could put a sloth in a tractor and it would have more drive than T.

‘Where’s the valuation form?’ I ask.
‘On your desk.’ Says T.
‘Any chance of a cuppa?’ I say, heading for the aforementioned paperwork. There’s a silence that becomes uncomfortable as people find renewed interest in their computer screens. I pick up the valuation form, then head for the kitchen.

‘Anyone else?’ I shout, as I fill the kettle, while reading the detail T has garnered. A chorus of yes pleases echoes back at me. Terrific. When I first started in this job the junior did all the refreshment making, photocopying and envelope filling. My man of the people, don’t ask anyone to do anything you wouldn’t do schtick, is possibly being taken for granted.

‘I think I know this house.’ I announce, with the valuation form tucked under my arm, as I bring back a tray of steaming teas and coffees.’
‘They said they thought they might know you.’ Says T, grabbing his personalised mug.
‘They were about your age group.’ Adds negotiator S, taking her coffee, with a disarming smile.
‘Ageing well, like George Clooney?’ I ask hopefully.
‘Nah, just old.’ Says trainee F, with a chortle.
Leaflet drop for him later.

‘Think it’s the house on the corner, with the pampas grass outside.’ I muse, out loud, as I scan the form.
‘Hah!’ Exclaims, loose lettings lush B, from her desk. ‘You know what that means.’
‘What?’ Asks T, as I grimace.
‘That they’re a pair of swingers.’ Says B, with authority - and she should know.
‘Golfers?’ Quizzes F, with a frown.
‘Not exactly love,’ says B. ‘Although they do like a good bunker-up.’

I’ve known for some time, the rumour that those who plant pampas grass in their front garden might be swingers, I can only imagine the confusion it can cause with less well-informed gardeners, who keep getting unwanted callers offering services other than window cleaning and tree-trimming.

‘So what is a swinger?’ Presses F, as the others giggle.
‘Well it’s nothing to do with those children’s play-things at the park.’ Says T, before adding with a frown. ‘At least I hope not.’

‘Wife swappers.’ Enlightens fat finance man M, joining the conversation.
‘Only not like your missus.’ Says T unhelpfully. ‘She just traded you in for a younger, thinner model.’
‘F••k off.’ Spits M.
Think I’ll let him off the swear box for that one.

‘So not like the old TV programme on Channel Four?’ Asks F.
‘That was more about exchanging lifestyles, love.’ Says S.
‘Not fluids.’ Adds T, with a smirk.

‘Yuck.’ Announces F, when he finally realises the implications. ‘But they were like my mother's age. People don’t still shag then do they?’
There’s a long, awkward silence, until F realises what he's said.
‘Umm, I didn’t mean like you boss,’ he stutters. ‘Anyway you are probably well past all that sort of thing anyway - didn’t you say you had National Trust membership?’

Once T and F have been dispatched on a leaflet drop round the crappiest part of town, the conversation continues.

‘It’s probably just a ridiculous rumour.’ I say, as I prepare for the appointment.
‘No. It’s true.’ Says B, authoritatively.
‘I’m sure they are just regular nice people, who go to garden events and book clubs.’ I hypothesise.
‘Yeh, bush-trimming and Fifty Shades Of Grey.’ Says M, with an unpleasant chuckle.

If I do get the business, perhaps I’ll suggest an open house event….

Thanks for sharing a thoughts its appreciated i like your information. You have a depth knowledge about mortgage services. Nice. I am also a mortgage service provider, please check out my site. http://www.mortgagerates-preapproval.com/locations/canada/ontario/toronto-on
Mortgage Agent

Garden in front of a house adds beauty to the house. In-fact, it is good for health.In the morning the fresh feel with plants is something that cannot be expressed in words.

The garden is the most beautiful place of our houses. If we have a garden in our houses we feel connected with nature. And it really gives us happiness and mental peace.

Yes garden is the most beautiful place in our houses. If we have a garden in our house, we feel connected with nature and this keep mind fresh and healthy.