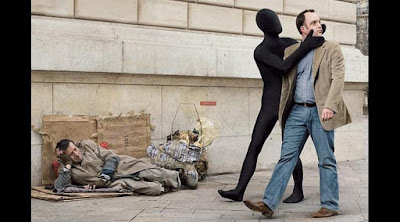 'Spare some change man?’ Asks the rough sleeper, propped in a grubby sleeping bag in an empty shop doorway. He looks suitably forlorn and judging by the damp piece of cardboard he’s lying on, the scattering of meagre possessions and the slumbering mangy dog, tethered by a piece of string, he’s genuinely been here all night.

‘Sorry pal.' I say, even before I’ve fully considered my thoughts, and I play out a familiar pantomime of throwing my hands apart, palms up, to signify I’ve no cash. Of course I do have money and if he takes contactless cards payments, as some professional beggars are rumoured to do - because the Big Issue man can seemingly afford a mobile phone - then I could help him with the price of a coffee. But conversely, if I can’t afford to buy my caffeine fix at  Costa or Starbucks why should I pay for his full-fat latte and slice of over-priced brownie?

‘Probably wouldn’t spend it on a hot drink anyway.’ I mutter to myself, as I continue towards the office and stumble across another homeless man, in another empty shop unit doorway. Pleasingly, it’s a commercial unit that not too long ago housed a fledgling, cut-price fee, estate agency firm. I saw them out of business, as I’ve done many others over my career. There are no short-cuts to good service and a good reputation.

‘Can you help me out?’ Pleads the second vagrant, lying on another bed of commercial packaging that isn’t going to be recycled any time soon. He has the sort of impressive beard, that with a little grooming, would put the second-coming hipsters who do buy coffee around here, to shame.

I could help the man out, I could point him in the direction of the job centre and let him know that if he applies himself, takes a bit of pride in his appearance and doesn’t spend all his benefit money on cheap cider and roll-up cigarettes, then I could possibly rent him a studio flat in six months time. But nothing is ever that simple.

‘I’m all out man.’ I tell the bedraggled figure. I’m not. It’s a blatant lie, but I’m torn between wanting to help these people out and the nagging feeling I’m being played. Plus, estate agents do have a reputation to protect…

‘Have a good day anyway.’ Mutters the man into his voluminous beard. Bastard. He’s been on the guilt-trip-close, sale’s course. I’m half-tempted to turn around and give him a pound coin or two, but that nagging article a racist couple showed me in their Daily Mail a few weeks ago, as they bemoaned the country and planned their flight to somewhere sunnier, is lodged like a parasite in my brain.

‘You see that’s what they do.’ Said the husband earnestly, showing me the picture of some eastern European pair, parking their BMW on a meter for the day and heading to the west end of London for a lucrative day’s begging.
‘The country is going to the dogs.’ Echoed his sun-bleached wife. ‘That’s why we’re leaving.’

They’ll be back once one of them gets ill and they’ll doubtless wonder why the NHS can’t help them, because all the non-native care staff have also left the country. I’m not going anywhere. I had the chance long ago, and figured if you can’t make it here, in the birthplace of democracy, in one of the most - until now- welcoming and liberal societies on earth, you won’t be making it anywhere else, just because you need a stronger sun cream.

As I approach the office I notice two more commercial boards above recently vacated shops. A horrible feeling of deja vu engulfs me. I’ve seen decimated high streets before and failed estate agency firms, the whole thing has ominous portents. Maybe the only way to solve the UK housing crisis is for another big property recession? It’s like a turkey wishing for Christmas, I realise, and it could be me sleeping rough if it really bites.