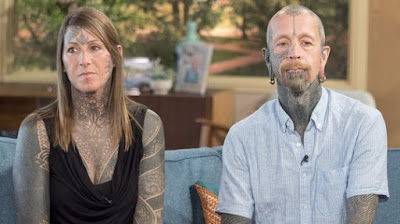 ‘She’s prickly today.’ I whisper to S, my negotiator, as I see B the loose lettings lush arguing with a young couple, at her desk. The pair are giving as good as they get, albeit in a sort of guttural slang English, peppered with language richer than they appear to be.

‘She’s been moody all day.’ Confides S, nodding towards B, as the heavily tattooed and heavily pregnant female she’s arguing with - an earlier production model in a pushchair alongside - starts to spout a line about unfair treatment. I grind my teeth. You don’t need accusations of that kind, no matter how false. The paperwork wipes out rain forests…

‘They can’t, like discriminate us, ‘coz we’s on the social.’ Spits the woman, as her neanderthal partner grunts in agreement. He has multiple piercings and a big ring through his nose that I’m thinking might come in handy if I need to lead him, forcibly, from the office. His tattoos are less inky than his girlfriend’s, but do extend up his neck in a fetching manner, that he might think fashionable, but pretty much precludes him from working in any public-facing position.

‘What a pair of retards.’ Offers fat mortgage man M, in a wheezy stage whisper as he waddles past us, en-route to the kitchen.
‘You can’t say that.’ Replies S, bristling, turning to me and adding. ‘Can he?’
Best not to tell her what I was thinking - pretty much a mantra to stick to all the time with S, as it happens.

‘They do seem a little agitated.’ I say to S soothingly. B is now spouting some line about her landlords not wanting tenants who don’t have their own income and employment, to cover the rent. It’s not an unreasonable request, and one I’d want to make if I could ever afford a second property as an alternative to my pitiful pension.

‘It’s f***ing guaranteed.’ Shouts the female, swooping to pick up the soiled dummy her child has spat on the floor. The chubby girl is too old to be sucking on the comforter but as her mother - and possibly her father - are still locked on to the State’s virtual tit, it seems ironically appropriate.

Actually, when the state paid rent direct to landlords it was a fairly safe vehicle for buy-to-let landlords, but once the benefits were diverted to the tenants first, the problems started. The off-licence and the drug dealer, sometimes got the cash before the landlord. It’s a cliche, but most cliches are rooted in unfortunate fact.

‘You shouldn’t pre-judge people.’ Says S softly, as the argument continues across the office. My money is on B, if the two feisty bitches start to fight. I reckon I can take the pig-nosed bloke if it kicks off, he’s wearing enough ironmongery for me to get painful purchase.

‘We try not to.’ I reply in a conciliatory fashion. And I don’t; I’ve sold enough homes to scruffy-looking individuals who turned out to be loaded, just with poor fashion sense, to know that. But the endless stream of deadbeats, who seem to know more about their rights than contraception, are starting to test, even my loosely liberal, ideals.

‘They just need somewhere to live.’ Continues S. ‘It’s not their fault housing costs in this country are a joke.’ I nod in agreement. She is right, and successive UK Housing ministers who last about as longs as an epileptic virgin on his wedding night, haven’t helped the problem. But this angry couple must have spent six month’s worth of rent on their absurd inkings, they don’t come cheap. And the over-sized baby in the pricey pushchair has managed designer boots and pierced ears, before she has jettisoned the dummy and been potty-trained.

‘I tell you what, I’ll swing for some of these people one day.’ Growls B, after the punchy pair have left, and the office door still rattles in its frame

‘Couldn’t you have found them somewhere?’ Asks S.
‘Would you want scum like that in your flat?’ Snaps back B.
‘I haven’t got one.’ Says S, haughtily.
‘Hypothetically.’