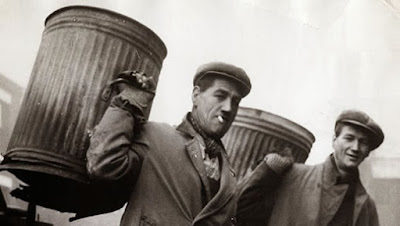 I’m early to the office again. Sleep patterns seem to become more erratic with age, either that or the stress of ever-climbing sales targets finally upset the bio-rhythms.

‘Morning.’ Says the man sweeping up the takeaway detritus from the previous night’s leisure activities. He just beats two overfed pigeons to the remains of a Kentucky Fried Chicken box. Not sure if that would qualify as some sort of avian cannibalism, but as the mad bag lady who keeps feeding them doesn’t seem to grasp, pigeons are basically flying rats.

‘Busy night again.’ I say to the street cleaner, nodding at the collection of franchised food outlet boxes, he is retrieving. I used to be a punk rocker, and railed agains society for a while, until I needed somewhere to live and a mortgage offer. But the sort of scumbags who can’t even be bothered to find a bin to dispose of their unwanted artery-clogging foodstuff, bring out the angry from middle-England man in me. Obviously, I would never buy the Daily Mail though…

‘They’re a bunch of animals.’ Says the unshaven council employee, with vigour. He’s technically accurate: pig, chicken and a beefy-looking kebab carcass, all in plain sight. The vegetarian take-away doesn’t open late, clearly when you get the boozed-up munchies you want something that used to have a heartbeat to satiate yourself. In any case, the veggies always use the bins, or take their containers home with them. You could almost forgive Linda McCartney for singing on Band On The Run.…

‘What’s the country coming to?’ I ask rhetorically, hoping to move on and get the office opened and the post too.
‘I’d shoot the bastards.’ Suggests the cleaner vehemently. Little extreme. I’m sensing a Brexiteer with a dislike of foreigners and their food. Next time I’ll not engage in platitudes and walk straight past him, like most commuters do. If he dislikes me, I’ll just show him a business card. Nobody loves an estate agent.

‘You are going to have to move mate.’ I say to the prone figure, swathed in cardboard who is slumped in the office doorway.
‘I’m homeless pal, have  a heart.’ Pleads the whiskery man, a waft of cheap alcohol rising from him like cider-laced steam.

‘Sorry, I need to open up the office.’ I tell the vagrant, patience thinner than a supermodel. I sometimes toy with putting some of those anti-tramp spikes in the doorway to solve the rough sleeper problem, but my industry’s image is already poor enough and knowing my luck I’d just impale one of our elderly clients. They hang around the office long enough, without being stuck in the doorway, pinned to the floor and shuffling unsuccessfully like an crumbly extra from The Walking Dead.

‘You lot are part of the problem.’ Says the man, as I finally get him to gather up his meagre belongings and shamble towards one of the charity shop doorways. They won’t open for a while and it’s an amusing test of their benevolence to see if they’ll move him on.

We’re not part of the problem actually, I think, as I pick up the post and feel a stinging pain run down my leg. F**k, bend your knees you idiot. How many times do you need to be told?

‘We just reflect the market.’ I say to the empty office, my voice bouncing round the void. The talking to myself is becoming an issue. ‘It’s supply, demand and the availability of finance.’ I continue, as I fill the kettle and line up everyone’s mug. I’m probably the biggest one. I don’t know why I’m still here, and I don’t know what to do about it.

Glancing at the office diary, my mood sinks a little further. Selling isn’t for the faint-hearted. You need the resilience of any rough sleeper, you just get screwed over in a warmer environment.

Fifteen minutes later, I’m sat on my own, tea cooling, morning meeting notes prepared. I glance at the clock, they’re all cutting it fine today. That recurring fear that everyone will ring in sick on the same day rises.