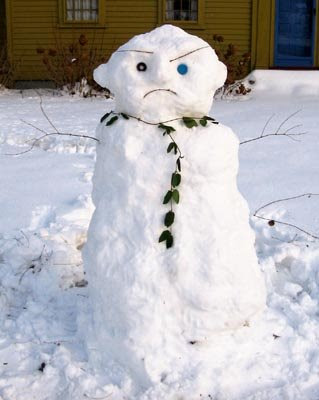 ‘Are you going to need to defrost the car this morning?’ Asks my wife as she arrives in her dressing gown. The kitchen lights are blazing, it’s still dark outside and I can’t really blame her for still being in nightwear. I’m just pissed off I’m in a suit, with trousers a little snugger than I remember, with a cold day ahead of me - and that’s before I try and speak to that frosty solicitor in the chain of seven, I’ve been chasing.

‘Already on it.’ I tell my wife, looking in the cupboard and wondering where she’s hidden all the sugary cereal options? She’s noticed the waistband issue too and the only Frosties now to be found seem to be hanging off my car door mirrors.

‘Do you mean you’ve been out on the drive in your pyjamas again?’ She quizzes. ‘’No, that was only once,’ I reply sniffily. ‘And nobody saw me.’
‘Just as well, or the house values would plummet faster than the temperature.’

Great, everybody is a property expert - except, curiously, the ones you'd hope would be. But enough about on-line call-centres masquerading as the real thing.

‘So you’ve left the car running, outside?’ Continues my wife, as I vainly shift three boxes of morning repast, herbivore food. Still nothing with any more processing than a hippy shovelling bran droppings and nuts into an eco-friendly box a four year old could have constructed, with leftover packaging from an Amazon delivery..

‘I’m hoping someone might steal it.’ I reply, giving up on the dusty scraping from a stable floor and heading to the bread bin.
‘Wasn’t there a memo about that, warning it would be a disciplinary offence?’ She asks. Nothing much gets past her.

‘It’s the only way I’ll get a new company car before this one is a collector’s item.’ I grumble, as I realise there’s no white bread in sight, just a seedy, uncut offering, that will probably shatter another filling if I munch down on it.

My rival manager, the vertically challenged H, is awaiting another new German car after hitting his year end target with three months to spare. I’m stuck with the poorly bolted together effort from what remains of Britain’s car industry. It seems even opportunist thieves round my way can’t be arsed to steal a base model Vauxhall with less extras than a sixth-former’s film project. Either that, or they are still in bed on such a chilly morning.

‘I’m not sure it’s good for the environment.’ Says my wife as I pick at the toasted granary off-cut I’ve opted for. Needless to say it’s burnt down one side and still cold on the other. I can’t cut a slice of bread straight to safe my life and my toaster purchases run in to double figures, yet I’ve still to find one that is fit for purpose. I’ve a good mind to write to James Dyson, or perhaps take a couple of slices to the local motorway services and thrust them in one of those air-blade machines - although pubic hairs on your breakfast isn’t too appetising either…

‘Not sure no longer warming my car up on the drive, so I can see where I’m going is going to, will make much difference to the ozone layer while China’s factories pour out unchecked emissions.’ I respond prissily.

‘That’s not a good attitude.’ She tells me officiously, stabbing at her smartphone to see if either of our sons wants to talk to her. I could point out the irony here - her hand-held communication device was almost certainly soldered together by a small, dark-haired,oval-eyed individual, with a persistent cough and a lung complaint.

Her words ringing in my ears, the exact words I heard when I spoke to the bean counter boss last and moaned about our unachievable office targets,I slip-slide on to the drive. The car screen has cleared and the exhaust plume isn’t quite so voluminous.

‘Lucky nobody stole that.’ Says the anally-retentive car washer next door, as he pulls his pristine motor from a garage that can actually accommodate a car.

I give him the cold shoulder.