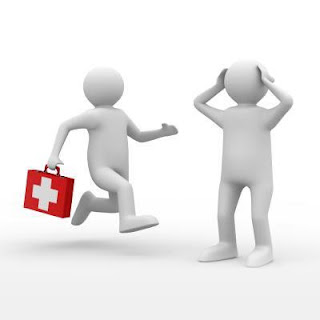 A scream echoes round the office and nearly gives me a heart attack. At my age and with celebrities sharing the same birth decade dropping like flies, I can’t afford too many sudden shocks. As it turns out, F the idiot trainee, is the one risking electrocution.

‘What have you done now?’ I demand, as I enter the main office and see F hopping around his desk like some epileptic frog.
The question is rendered as redundant as he should be, when I see a pool of hot coffee spread across his desk, seeping into his keyboard, as the free mug from a lending institution I really dislike, sits on its side almost empty.

‘He’s spilt his drink.’ Says negotiator S, as she moves to F’s work station and starts to dab at the puddle with some tissues.
‘Careful you don’t short-out the circuitry.’ Cautions assistant manger T, making no attempt to help. My circuitry is close to meltdown, I think uncharitably, and I can’t just be mopped down then switched off and on again.

‘How did you manage that?’ I demand, as F stops jerking around and patting at his sodden shirt sleeve. He won’t know.
‘I don’t know.’ He confirms, clutching at the dampened material, before saying pitiably. ‘I think I may have some sort of burns.’
‘Well it won’t be first degree.’ Suggests loose lettings’ lush B. She knows F flunked an expensive private education and is also well aware you don’t need any qualifications to become an estate agent.

‘You’ll be alright.’ Soothes S as she finishes clearing up the spilt beverage and begins to lift the dripping keyboard.
‘Careful.’ I tell her. ‘It might give you a shock.’
‘It’s low voltage. Shouldn’t be dangerous.’ Opines T still sitting in his chair, some distance away from any potential electrical arc.

‘I’ll get the first aid box.’ Says S, dropping the stained tissues into F’s waste paper bin and heading for the kitchen.
‘Slim chance of anything useful in there.’ Says obese mortgage man M. ‘Health and safety Nazis took everything out of the box, last visit.’

M is right. The paracetamol and Ibuprofen I left in the red plastic container were confiscated. The cream for minor cuts and abrasions removed, in case of allergic reactions and the scissors taken - presumably to stop me from stabbing someone from head office with a job title as meaningless as Esperanto.

‘Yep, he’s right.’ Confirms S, as she lifts the lid of the first aid box and pulls out a couple of faded bandages and square of linen that might double as a sling for a petite pantomime performer, should Snow White be playing at the local theatre.

‘About as useful as a chocolate tea pot.’ Confirms M, with a hearty chuckle.
‘That could cause even more nasty burns.’ Says T, with a smirk.
‘Good one.’ Says T.
If they high-five each other, I might really need to call casualty.
‘They’ve even removed the safety pins.’ Says S, with a shake of her pretty head, as she empties the useless contents on to the desk.
‘But surely….’ Begins F, still waving his arm around piteously.
‘Don’t even go there.’ Says T.
‘No point.’ Adds M, smugly.
Put your hand in the air and you’ll be needing a first responder, I think, scowling at the blubbery buffoon.

‘You’ll be wanting this.’ Suggests B, as she tosses an embossed A4 sized stationery item at me, while S tenderly inspects F’s arm, now his soggy sleeve is rolled up. Fleetingly, I wonder if I can produce a spillage she could attend to. Best not.

I Frown at B. She’s given me the company accident book. A journal where all incidents, no matter how trivial, must be recorded - for personal protection and insurance purposes. Translation: to cover the companies corporate arse cheeks, should someone wish to sue, retrospectively.

‘If I fill anything out there’ll be a load of pointless paperwork.’ I grumble.
‘Your shout.’ Says M, ducking responsibility with surprisingly agility, for one so bulky.
‘I think I’ll live.’ Says F, stoically.
I’ll be the judge of that.

I take a chance.


If the ambulance chasers turn up, I’ll feign illness.

Back in a week - download the ebooks if you miss me - or not...
Links on right, all formats via Amazon.

Regards to all those USA readers - still outstripping UK by five-to-one.
Posted by secret agent at 6:48 PM

We just love your introduction to the blog.