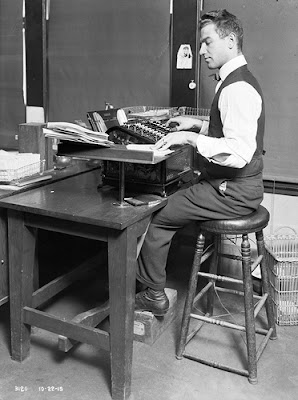 H my vertically-challenged, rival manager rings. It won’t be a social call. He only makes contact to gloat over his office’s superior sales figure, or because he wants something. If he’s run out of stationery again he can twist. Just because I have supplies of A4 paper, printer cartridges and compliment slips that could stock a Government Department for a year, I’m not about to help him out again. Bad enough I have to applaud every time he gets the quarterly performance cup. Apart from my dentist, he’s the only one smiling every time he gets that prize.

‘How are things?’ Asks H flatly. He couldn’t give a toss, so he needs to cut to the chase before the truant officer asks for some ID. Unless the circus is in town and he’s running away to perform with Snow White and six other short arses, H won’t be be leaving  - he’ll be taking.

‘Not too bad.’ I lie.
‘Many sales in the bin?’ Persists H unconvincingly. He’s clearly on for a bumper week. Gloating is such an appropriately small trait.
‘I’m holding my own.’ I say, thinking that’s what he’s probably doing. If I wanted telephone sex I’d dial a premium number, or at least I would if the bean counter boss hadn’t put call-barring on the office phones. Still not sure who the biggest wanker is in my office, but my money is on F the hapless trainee - although with his timekeeping he wouldn’t come early…

The silence becomes uncomfortable.
‘What is it you’re after?’ I say, cracking first. H chuckles.
‘Am I that transparent?’
Plastic tends to be.

‘The thing is,’ says H. ‘Word on the street is there’s a mystery shopper doing the rounds. I shrug and there’s another long silence, until I realise visual clues don’t work so well over the telephone.
‘So?’ I reply. I don’t get bothered unduly by mystery shoppers - individuals employed by head office to test the performance of  staff - as I hope everybody gets treated with courtesy no mater how banal their enquiry. The bitching starts once they’ve been identified as time-wasters - and once they are out of earshot.

‘So, we need to get the jungle drums beating.’ Continues H, urgently. ‘Identify the tosser and circulate their description. Get some photos if we can.’
I can understand H wanting to avoid steep steps but does he really need to cut so many corners? He sails closer to the wind then Sir Ben Ainslie, but as long as he keeps delivering top sales figures -  to continue the nascent nautical analogy - the bean counter boss, makes like Lord Nelson.

‘I’ll put the word out.’ I tell H, tiring of the conversation. He doesn’t know he’s born. Not for the first time I start fantasising that if only I had his office, with it’s superior catchment area, prime position and less than effective competitors, I could…. well… I could be a contender….

‘Make sure you ring me if they come to your office first.’ Urges H.
‘Worried about how your team will perform?’ I goad. Like a bunch of in-bred central London estate agents, his staff are fat on commission and complacency - just without the double-barrelled surnames.

‘We’re too busy to faff about with pretend applicants.’ Snaps back H. ‘If they don’t want to buy, rent or take out a policy, on to the next mug punter.’
You can see why the industry engenders so much love.

‘What makes you think we’ll spot them any more than you will?’ I ask tetchily.
‘Well your lot are…’
‘Are what?’ I snap.
‘Well you’ve got more time on your hands..’
It’s not getting any better.

‘If they get good service you’ve got nothing to worry about.’ I tell H. I may not be able to hear it, but I can feel my head banging against another wall.
‘Do you realise the number of tossers that come through my office door?’ Demands H.
Excluding staff members? I think sourly. Actually I do know, I see the weekly sales data - and that’s after H has sanitised it to make his conversion rates look better.

It’s a game, a numbers game.

Off for some late summer sun. Download the ebook and check the Twitter feed for your poolside property news fix.
Posted by secret agent at 7:35 AM

What do estate agents think of the Summer Budget landlord tax proposals.

I hope you can put a funny spin on it...

It also one of the good post in agent diary, keep posting nice stuff.

of course they can't. it's horrendous for BTL which is now toast. the masses haven't woken up to it yet. my god what a shoock they'll get when they do

Totally agree Jonathan. I read with interest that the Government has no intention of changing the law. If it gets through this October, then some serious thinking needs to be done by all landlords, myself included. I'm going to need to sell a couple of properties at least - and there goes the pension, so I'm in trouble come retirement.