Back To Black - Wednesday 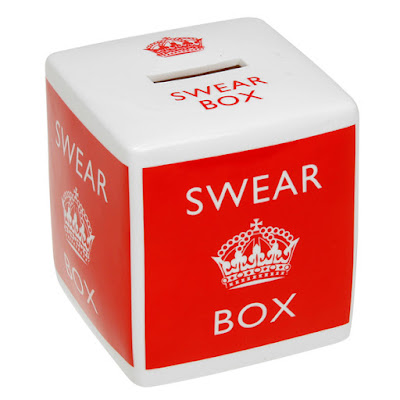 ‘Here they come again.’ Warns negotiator S, as she looks across the high street. Everybody cranes their necks through the window display, to try and narrow it down a bit. You get plenty of wastrels and nutters through an estate agent’s door and it’s only worse in the summer, when you prop the door open because the cheap air conditioning the bean counter specified has pissed legionnaire’s disease riddled water, through the ceiling tiles again.

‘F**k no.’ Groans assistant manager T.
‘Swear box.’ Says S, indicating my one nod to charity collection after that disastrous bike ride a few years ago. A pedal where my group got lost, ended up with blistered feet, one suspected hernia and more sore bottoms than a Fifty Shades Of Grey convention.

Every estate agent has their regular time wasters, the perpetual lookers who always find fault with each new instruction you offer them and always say they’d move, if only they could find something as nice as their own home. In the end you realise they’ll only leave their existing house feet first in a box, but it doesn’t stop them pestering you.

‘They’re never going to buy anything are they?’ Says trainee F, with unusual insight.
Not unless some Russian oligarch with a sat nav failure decides to buy their house for several million.’ Chuckles T.
‘Even then they’d grumble about our fee.’ I say flatly.
‘You didn’t really do much for your money.’ Mimics S, to giggles all round.

‘Everybody wants to buy at Macclesfield money and sell at Mayfair prices.’ I announce, rather proudly.
‘You’ve been working on that one.’Says T, with a shake of his head. I have, but then these pearls of wisdom don’t just come out of a cracker.
‘You should write some of those down.’ Suggests S, with a winning smile.
If only she knew, but then again, probably best not…

‘Perhaps they are thinking of renting their house?’ Says T with a mischievous nod towards B, our loose lettings lady.
‘They can piss off.’ Snaps B grumpily. ‘I’ve got enough loony landlords to fill a coach trip to Bedlam.’
‘Is Bedlam that new development on the green field site they made all the fuss about?’ Questions F to groans.
Although, plenty of people were mad about it when the planning went through on appeal.

‘Perhaps they won’t come in.’ Says T unconvincingly, as the couple in question hesitate on the far side of the street and I pray for an ill-judged crossing attempt and a runaway juggernaut. ‘No they’re coming in.’ I say ruefully. I just thank God I managed to move the coffee machine from the front office to the kitchen. Start providing free beverages for these people and you’ll be tucking them in with a blanket and a hot chocolate every night, when you close.
‘Morning Mr and Mrs Godfrey.’ Says S with Oscar-winning sincerity, as the pair arrive with, sadly, no sign of any heavy goods vehicle brake failures.
‘Do you have anything new for us?’ Asks Mrs Godfrey with a condescending look. I nod towards them. I must have valued their home at least four times over they years and I know, in the unlikely event of the idiots ever actually placing their tired semi-detached house on the market, they’d opt for the most outlandish asking price and the cheapest fee. Not me. Never me.

‘Have you thought any more about placing your own house on the market? It would put you in a better buying position.’ Coaxes S, after she’s taken them through several perfectly acceptable replacements for their own home.

‘You find us something better than ours first.’ Says Mr Godfrey dismissively.
‘I doubt they will dear.’ Adds his wife. ‘What we’d really like to do….’

Yes, is pick your house up and move it.