The God Of Small Things - Friday 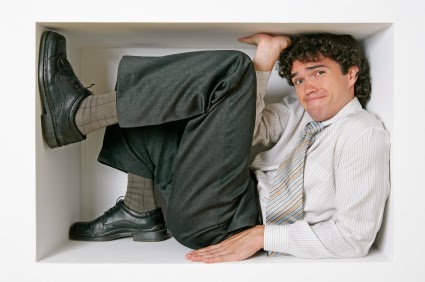 ‘You’ve a studio flat to look at later.’ Announces negotiator S as I re-enter the office after the joyless  run to pick up a low-calorie, taste-free, meal deal.
‘What’s that going to be like?’ Asks trainee F gormlessly.
‘The stationery cupboard.’ I tell him, dumping the wafer-thin sandwich, pseudo-crisps and tired-looking fruit combo on the desk.

I follow F’s gaze towards the aforementioned paper and pen repository. God, I sometimes long for less litigious times when it was acceptable to clout a dozy trainee around the ear, or just ask for his office keys, without verbal warnings in writing and a multi-stage disciplinary process monitored by Human  Resources' drones and legal insurance companies. I’ll have to settle for sending F on an afternoon’s leaflet dropping in the rain.

‘He means it will be compact.’ Says S to F, gently.
‘Cramped.’ Adds assistant manager T, who seems to have ducked the undersized valuation somehow.
‘Bijou, even.’ Contributes fat mortgage man M with a chubby-chopped smile. That confuses F even further, until lettings lush B adds:
‘Shite.’

I vividly remember when I first visited a studio flat, back in the late eighties when developers and speculators were busy maximising profit and minimising square-footage, in shabbily converted, once grand, Victorian family homes.

Tagging along with the kindly surveyor I was training with, we entered a top floor roof space, once designated for servants or Not Needed On Journey labelled packing cases, to find a plaster boarded space with sloping roof lines, fit only for Snow White cast members.

As I tried to hold the old-school tape measure to the widest extremity, I was thinking if this was the lounge, with a DIY style galley kitchen incongruously in one corner, how pokey was the bedroom going to be?

The first door I tried was minuscule shower room with no natural light, a wheezy extractor fan, and a toilet wedged so tight to the angled ceiling that you’d never piss standing up. The second door I tugged, expecting to find the sleeping accommodation, turned out to conceal a clumsily-lagged hot water tank.

‘So they sleep in the lounge?’ I remember asking, hesitantly. A somewhat smarter, and smarter-dressed version of F, on reflection.
‘It’s a new concept.’ Enlightened the old, Fellow of the Royal Institution of Chartered Surveyors, with a frown. ‘It won’t catch on. I’m going to down-value it.’

‘I’m not sure I’d want to buy a flat that small.’ Speculates F, once he’s finally grasped the concept of turning your sweaty sofa into a bed at the end of an evening.
‘Just as well, you couldn’t afford it on your salary.’ Says M with a hearty guffaw. ‘Particularly when you’re on commission. Not even I could fudge the employer’s reference enough to find a lender for you.’ He adds, unkindly.

‘We all have to start somewhere.’ Counters S, fiercely.
‘Yeh? Well if I can’t bolt on endowments, or PPI sales any more, I’m not about to risk my licence fabricating income am I?’ Sneers M.
‘Can’t he self-certificate?’ Asks B from her lettings enclave.
Only for sick notes.

‘We need to trade up.’ Says the earnest young woman later. She has an obvious swelling in her belly, as her stooping boyfriend nods in agreement and tries not to bang his head on the ceiling. There’s not enough room to swing a cat in the tired-looking conversion, and yet paradoxically, they have a hissy furball in residence, one that is weaving between my legs, purring aggressively and shedding fur all over my dark blue trousers. I can feel the first sneeze bubbling up.

I can’t see they’ll even get back what they paid for the pokey little studio flat. The dodgy developer helped fund the deposit, probably on the back of an inflated sale price and a complicit broker. I don’t want to be the bearer of bad news, particularly as the poor women is expecting a baby shortly. I wouldn’t mind killing the cat though.

Not a great success.
Price upset them.
Suit needs cleaning - and turns out she wasn’t pregnant.