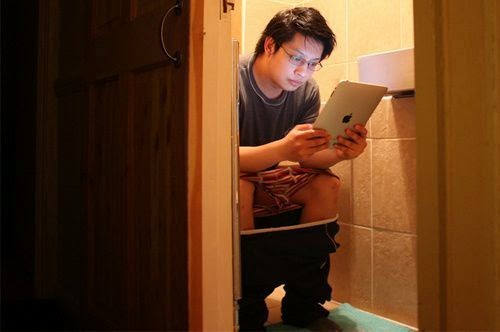 ‘Who was in the gents’ last?’ I ask, as I stagger back into some fresh air. It’s a rhetorical question. I already know it was M the clinically obese mortgage man. God alone knows why some people wait until they get to work to carry out their morning ablutions. I’m used to getting dumped on in this business, but I’d rather it wasn’t by colleagues.

‘I think you probably know.’ Replies negotiator S with a rueful smile. She nods towards M’s office where he is hunched over his laptop staring intently. I’d like to think he’s researching the best rates for first time buyers - or even air freshener sites - but it’s probably something more grubby.

‘Oh my daze.’ Exclaims trainee F, bringing me back to the present as he holsters the phone, claps a hand to his forehead before heading to where I’ve just emerged from. Good luck with that boy, you’ll need an aqualung.

‘What’s he confused about?’ I ask S, thinking the choices are endless.
‘Confused?’ Says S, head cocked to one side alluringly.
‘Yes, he was in a daze.’ I reply, starting to get tetchy even before I begin looking at group stats and the office league table.

S suppresses a giggle. ‘No, he said Oh my days.’ She tells me with a shake of her head.
‘What does that even mean?’ I snap back, wondering just when I became such a grumpy old man?
‘It means he’s had some surprising news, or a bit of a shock.’ Enlightens S.
The clown will certainly have a shock when he enters the toilets, and M has undoubtedly been enlightened…

‘Why can’t he speak in recognisable English?’ I grizzle. ‘It’s not as if his mother didn’t waste enough money on private schooling, now he has to effect some sort of hooded-street-thug patois.’
Now S is looking at me quizzically and I belatedly realise.
‘No, I don’t mean block paving in a garden - that’s a patio for crying out loud.’
I can feel my life ebbing away.

Non-standard slang and street talk explained as patois, I move on. I don’t have time to make up for all the deficiencies of Britain’s education system - and I thought I was betrayed when Margaret Thatcher stole the milk allowance.

‘Mrs Franklin on line three.’ Announces S later. I throw my hands to the sky.
‘The flat on London Road.’ Coaches S gently.
After enough people to fill a phone book, I can remember the properties but not the surnames.

‘We really need to get some viewings.’ I announce after five minutes with my ears being bent and a further two flannelling the woman on why we’d have some viewers for her home shortly. Even as I peck at the keyboard to pull up the history of Mrs Franklin’s flat, I suspect something has gone wrong.

‘iPad!’ Exclaims F with a familiar hand to forehead gesture.
‘I’m not interested in your birthday wish list.’ I snap irritably. It’s an expensive two bedroom flat, not an overpriced tablet I’m discussing. But something about F’s demeanour alerts me to a problem, one that becomes apparent as the property record rises onto the screen in front of me. We haven’t mailed out any details of Mrs Franklin's flat. Not one.

Now it’s true internet property portals are the main channel for enquiries and also for advertising homes for sale. And it’s equally true estate agents dislike the cost of the vast search engines. For years I was overcharged by the local papers, now it’s on-line robbery rather than ink and paper pilfering. And the irony is, a group of estate agents set up and nurtured one of the most well known sites. It’s a bit like greedy relatives with power of attorney emptying their ageing relatives bank accounts before the care home costs rack up.

‘Who was supposed to action the mail out?’ I ask angrily, grimacing towards F.
‘iPad.’ Repeats F eyes downturned.
I look to S for help.
‘He said. My Bad.’ She tells me.

Apparently it means I’ve screwed up.

Download the ebooks to iPad, Android devices, PC etc, with links on the right. Free reader software via Amazon.
Posted by secret agent at 9:02 PM