Not For Sale - Friday 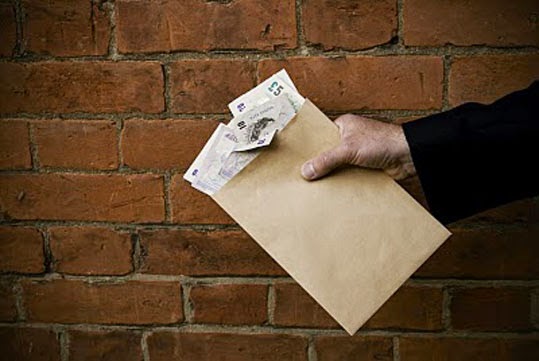 ‘Can I have a word?’Asks negotiator S after tapping at my - nearly always open - door. You can have three I think, politically incorrectly. She does look good though and a lot more attractive than some of the other rubbish in the office window. Injudicious thoughts shovelled to the back of my brain, I answer in the affirmative.

S take a half-step in and pulls the door semi-closed. Not sure if my gulp is audible but it’s certainly inappropriate. I wait in anticipation, nagging voice at the back of my mind already pushing unhelpful scenarios. If she’s resigning I’ll be gutted. If she’s pregnant I’m not sure, even with two decades worth of sales experience, if I could feign any form of delight. Fortunately it’s neither.

‘There’s a dodgy looking guy in the office.’ States S, hand over her mouth as she whispers.
‘Could you narrow it down a bit.’ I tell her, craning to look into the main sales area.
‘Good point.’ Concedes S with a disarming smile. ‘He ’s asking if he can have a word with the manager.’

‘Complaining or selling something?’ I probe, still trying to spot the character in question. F the idiot trainee is stood in my line of vision, waving his hands about excitedly. He’s either just taken an offer or about to have a seizure - either comes with a lot of paperwork and arguably, both could have a favourable outcome…

‘Definitely wants something from us.’ Predicts S. ‘Far too polite otherwise.’
‘But shifty though?’ I press.
‘Oh yes,’ confirms S. ‘Made me feel bit uncomfortable.’
It happens.

‘Alright.’ Begins the scruffy haired geezer in a rhetorical opening gambit, when he’s been ushered in to my office by S. He’s dressed in stained jeans, a t-shirt barely retaining a bulging beer-gut and a bomber jacket that has seen better days. I was, until you washed up like a turd on a beach I think, as I catch an unwelcome whiff of nicotine, carrying halitosis and body-odour-laced undertones.

‘I wondered if you might put some business my way.’ Says the man with a yellow-toothed grin, as he proffers a business card. I take the offering and peruse his details as he adds. ‘For the usual consideration of course.’

Great, everybody thinks all estate agents are bent. Plenty are of course and if you don’t have any licensing standards or exams for entry - like most other countries do - it’s not surprising some dubious characters get to don a suit and con a punter. I’ve never taken a back hander - although a few people have tried to slap me - and even after all this time, when someone offers me a “brown envelope” full of used notes I still take offence.

‘Not interested.’ I say curtly to the man’s obvious surprise.
‘We do a lot of business with…’ And the man names one of our less professional competitors. It doesn’t surprise me.
‘We’ll do any house clearance, you know, goods and chattels if someone’s popped their clogs and the family aren’t nearby.’ Continues the man odiously. Do I look like an unprincipled bastard?  I think angrily, and the unhelpful inner voice gives me an answer I don’t need but the charlatan in front of me, clearly subscribes to.

I’ve lost count of the number of times I’ve been offered bribes by developers and speculators to favour them with the chance to buy at a reduced price and with no competitors but now the f***ing rag and bone man thinks he can buy me. Trouble is, plenty of agents take the money rather than offence. No wonder the press and the public vilify the profession.

‘He left in a hurry.’ Says S when I follow the man to the door, just to make sure he’s off the premises.
‘Not quick enough.’ I reply watching as the man sidles across the road to the office of the competitor he named. No doubt they’ll be laughing at me in there, shortly.
‘What did he want?’ Queries S.
‘To buy me.’
‘God don’t you hate that?’ Says S.

Avoid property indigestion and download the ebook on Amazon. All formats supported. Links on the right. It could save you money big spender...
Posted by secret agent at 10:03 PM

Sometimes it's worth having house clearance people on standby as property sellers have no clue on how to stage their property for sale.

Sometime a good house clearance company is useful, no matter how you coax a vendor to tidy up, perhaps emptying the home is the best course of action. :-) (naturally legally and with owners consent)

Clearing all our items from our house might be a daunting task for us.It's a very interesting blog.That's why i think you are an intelligent and qualified blogger.Thanks for this great post.