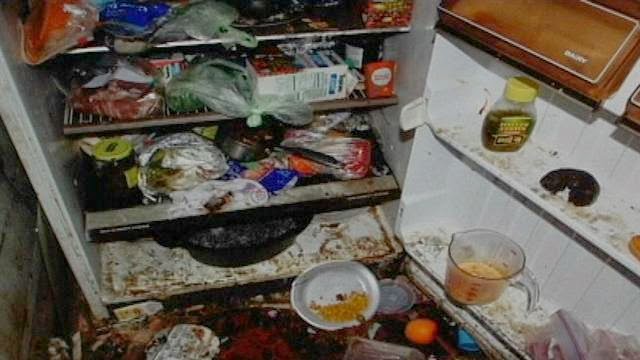 ‘Argh, for pity's sake what’s that stink?’ Asks trainee F as I manage to force the heavily boarded entrance open, shoving against a tidal wave of junk mail acting as a paperweight doorstop.

‘You get used to it.’ I fib, trying not to gag as I peer into the murky depths of the hall.
‘It smells like something has died?’ Says F, clutching at his nose with that faded linen handkerchief his mother taught him to use. Not pleasant. Equally unpleasant is this repossession we’re entering, one that has had squatters living inside during several months of extended legal battles. They’re gone - at least I hope they are or the cloying aroma might just be a decomposing smackhead - but the messy part is still to be done.

‘I’ll turn a light on.’ Suggests F fumbling at a grubby switch plate underneath an electricity junction box that looks as though it’s been tampered with, judging by the trailing wiring.
‘Good luck with that.’ I tell him, reaching for my heavy duty torch and waiting for the lifeless click. It comes and after a long pause, so does F’s response.
‘The power’s not on.’
I should be given charity status for keeping him off the streets.

Repossessions (foreclosures to my cousins in the USA) are never fun, they wax and wane with the market conditions, but they are a constant no matter what prices are doing. People always fall into financial difficulties when they borrow heavily over a 25 year plus period. Divorce, redundancy, illness are all drivers in supplying estate agents with a steady flow of instructions to sell. Every cloud has a silver lining…

With a satisfyingly weighty clunk my Maglite torch sends a bright lighthouse-like beam down the cluttered hallway. Half filled bin bags slump like decapitated Guy Fawkes dummies across the threadbare carpet and a collection of nearly empty beer and spirits bottles, lie scattered along the length of my field of vision.

‘Shit.’ Exclaims F Incredulously.
‘Stepped in some?’ I ask, shining the torch at his feet.
‘God no.’ Replies F, peering down quizzically. ‘At least I hope not.’
‘Early days yet.’ I tell him, moving cautiously towards the first internal door.
If the power is off, it’s a fair bet the water is too. I’m minded to send F into the bathroom first.

‘How do people live like this?’ Asks F as I spin the beam back and forth across the cluttered lounge. The bay window is heavily boarded with just one struggling beam of daylight attempting to send a shard of watery sunshine into the room, via a knot hole in the cheap shuttering.
‘Some blame the government, some pin it on illegal immigrants, some on greedy bankers.’ I tell him. ‘It depends which newspaper you read.’

‘All of them here.’ Responds F sweeping his hand across a pile of backdated newsprint on the sagging sofa.
‘More bedding than intellectual stimulus.’ I tell him, glancing warily at the stain-covered carpet. Any sign of spent needles again and we’re both out of here. They don’t pay me enough to perform another high-stakes game of hopscotch through a dance floor made from syringes.

‘I’ve never seen anything like this.’ Pronounces F as we make our way into the kitchen, where natural light is filtering through a broken fanlight above the padlocked back door. I have.

The work surfaces are cluttered with the detritus of a hundred oily takeaways. Foil trays, pizza boxes, chips cultivating interesting bacterial growth bedeck the area. The remnants of the only cooking performed are perched alongside the fridge. A bent spoon and more foil paper along with dozens of blackened corpse-like spent matches next to a three-quarter burnt candle. Incongruously it looks like one of those church types - but we’re a long way from God here.

‘I wonder what’s in here?’ Speculates F stretching out a bony hand.
‘Don’t!’ I scream in anguish . ‘Never open the fridge.’
Too late.

‘I need to go home for a shower.’ Splutters F as we take in fresh air and I ring to arrange a house clearance. He’s learnt something today.

Clean up with the ebook on Amazon. All formats:

More of an estate agent than an editor it seems....