Let's Do The Timewarp - Wedneday 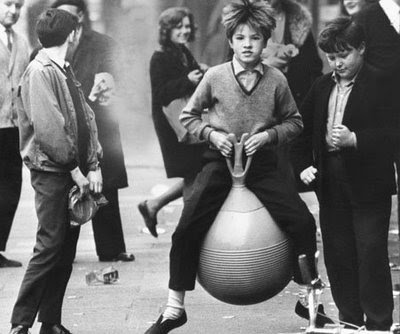 Stuck in traffic again. If I’m not gridlocked I’m dodging aggressive traffic wardens, determined to not rest until every town is a wasteland of boarded up units interspersed by charity shops and coffee outlets. I have idiot trainee F alongside me so there’s not a lot of intellectual stimulus and the local radio presenter – only allowed as an auditory intruder in case he can pre-warn me of any further traffic blockages – is vainly trying to plug some absurd competition to guess three celebrities from a trio of nano-second clips. The hook is tens of thousands of ‘life changing’ pounds that won’t even buy you a studio flat round here. God, I despair of humanity.

‘Who do you reckon they are then?’ Enthuses F, nodding at the radio. ‘We could ring in.’
‘You might as well try and guess the lottery numbers.’ I tell F wearily, spotting an opposition for sale board and bristling uncomfortably - even after all this time.
‘Yes but it’s a huge amount of money.’ Continues F. It’s not. I point out the cost of housing stock and then remind the fool that to call in you need to ring some pumped-up price phone number that is in all probability funding the ‘giveaway’. F looks crestfallen. He has to learn sooner or later.

Finally we move and I take a rabbit-run short cut through some 1930s housing stock. The roof tiles have been replaced, on some, with unsightly concrete interlocking pieces that will be throwing up survey problems in years to come, as they’ll be too heavy for the existing struts and purlins.
What sort of vintage do you think these are? I say, nodding towards the spec-development semis, while squinting at the unaccustomed sun and tugging out my sunglasses.
F frowns. I wait, then bump over several sleeping policeman. My back winces ahead of F’s pearl of wisdom. He hasn’t a clue.
‘It’s hard to tell.’ He eventually ventures.
‘Look for styling cues.’ I tell him, seeing, through my tinted vision, bay windows, tile hung elevations and cast iron guttering.
‘Uhm, are they like original Ray-Bans?’ F finally asks.
Think I’ve mentioned no minimum qualification for estate agents before...

‘That development.’ I say to F as we pass a mock Tudor cul-de-sac of identikit executive homes, all with double garages but still not enough parking for the two teenagers, four car families, now living there.
‘They’re kind of modern’ Ventures F timidly. They were when I first started in estate agency, I think gloomily. Now the Energy Performance Certificate assessor will pick holes in the loft insulation levels, the lack of cavity wall filling, then condemn the wheezing boilers with crappy energy ratings and no condensers.
‘They’re 1980s.’ I tell F, as I swing back out on to the main road then use my local knowledge to dodge more road works, darting down a road containing some rare 1950s bungalows.

‘These.’ I say to F, as we exit past the temporary traffic lights and I get a rare shiver of pleasure as I spot the van we had been following still stuck on red, some three hundred yards back. No sign of any workmen, needless to say.
‘Well these are old.’ Posits F staring at the last bungalow on a corner plot that might just take a planning application for in-fill, if it wasn’t for the tricky access back on to the main road.
‘How old?’ I press. ‘Pre or post war?’
F shrugs then asks.
‘Is that the Falklands war?’

‘Here we are.’ I tell F as we turn onto a sprawling housing development with virtually no architectural merit. The gardens are open-plan as will be the downstairs accommodation. Crazy paving paths and matching chimneybreasts are hardly complemented by huge, single-glazed, picture windows that drip with condensation nine months of the year.
‘These are cool.’ Enthuses F as I take a sideways glance at the imbecile and almost mount the kerb.
‘The energy assessor might think so, but that’s for a different reason.’ I carp.

‘1960s like Mad Men, you mean?’ Asks F after I’ve tired of waiting. I nod and he looks at me hesitantly. Eventually he speaks.
‘Is that, like when you were born?’

I preferred it when he was wrong.

Decades' of property wisdom for pre-decimal price in the ebook on Amazon, here: