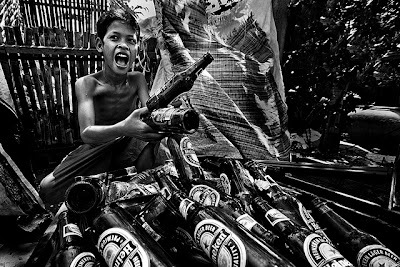 Not sure how long this eco-friendly surge will last as I rather despise the worthy, beardy, touchy-feely, all animals should be cherished and not eaten brigade. But I’m off to recycle again. I’m going before the sun has barely risen, as I woke in the small hours once more, fretting about contracts and month end sales figure, plus I’d like to get to the recycling point before too many people can see me.

Company car loaded, a faint smell of alcohol permeating into the cabin space, I set off in the half-light only to see that obsessive car cleaning neighbour is already out on his drive, caressing his vehicle again. He’s wearing bright yellow rubber gloves and has his jet-washer plugged in and ready to go. I’m trying to stop planet pollution and this tool is about to subject the neighbourhood to early morning noise pollution. If I ever want to sell, he’s the type of twat that solicitors will be asking about in pre-contract enquiries, so I dare not put any complaint in writing. Don’t ever leave an audit trail - unless you are fending off the trading standards people.

The man looks up as I drive past and gives a cursory nod. He knows what I do and, like many, doesn’t like it. But then he’s some sort of number-cruncher – akin to my bean-counter boss - so the feeling is mutual. I just have the grubbier car.

To my dismay, the recycling point is already busy as I pull up and brake a little too sharply. I’m rewarded with a muted rattling and at least one shattering sound from the back of the car. Terrific.

I can see an old boy looking at me, even as I start unloading my considerable cargo. I seem to attract nutters like flies to a turd. Nothing in my body language says engage with me please - I do enough of that during working hours - but he’s clearly desperate to catch my eye and begin a conversation.

‘Morning.’ Announces the pensioner cheerily, as I struggle to lift far too many sagging and slightly soggy cardboard bottle carriers.
I give him the sort of nod the compulsive car cleaner gave me earlier, but I know that won’t shake him. He watches as I begin the laborious task of posting spent beer and wine bottles into the metal containers. To a cacophony of clanking, I deposit an embarrassing number of glass vessels, a vague recollection of the time and place of consumption flickering through my mind as each crash and smash echoes accusingly back at me. He’s still looking.

‘Good party was it?’ Asks the man brightly. God, surely there’s a 24 hour help-line for these people? They shouldn’t have to hang around Tesco Express car parks. Do I tell him it wasn’t a party? Mention I’m an estate agent and I don’t have that many parties- or friends - but need to drink heavily after six days a week of wearing engagement with members of the public, people like him? Probably not.

‘I just haven’t been here for some time.’ I tell the stalker neutrally and not entirely truthfully
‘I’m off the sauce.’ Announces the man explaining why he has that slightly wired look and has started the engagement I didn’t want. He clearly hasn’t tried to move house for a while, I think, sourly. But I’m wrong.

‘Don’t I know you from somewhere?’ The persistent pest questions, as I return for my third trip to the car, cardboard containers replaced by those supermarket carrier bags. The ones they are reluctant to give you now and only hand out if you surreptitiously ask for them like some pervert requesting top-shelf material involving farm animals and Wellington boots.

‘Possibly.’ I say neutrally, shoving two bottles of dusty convenience store sourced merlot from a particularly bleak night when my wife was at fat club and my day had involved slim-pickings and two sales falling through, into the bin
‘It’ll come to me.’ Insists the man, as a trickle of stale red wine runs down my arm as if I’ve slashed my wrists.

‘I’m the estate agent.’ I tell him curtly.
Conversation over.

Save paper and download the 'Agents Diary' ebook for less than a bottle of beer, here:

Well as you seem to be lacking comments these days (maybe a parallel with house sales) I thought I'd bump one up for you, lol.

Maybe your my agent worrying about our purchase and I am yet to find out...well feel free to hassle our solicitor, that might do it....

I think you may class me as that obsessive car cleaner, at least I feel like less of a nutter than my OAP neighbours who garden in the rain and frost. But of course they only come out at the weekend and get in the way....what is it with old people and not doing stuff in the week...or insisting on travelling in rush hour!!!!!!have they got nothing better to do....like perhaps overprice their house or somehting...not like they are going to give it away is it!

It is a informative post....thanks for sharing with us....letting agents in B4

Just as late as the daffodils have been to show here, suddenly a crop of "For Sale" boards have sprung up. Is this the (delayed but) usual "spring bounce"? ... Or the last rush for the exit to "sell at the peak"? Note that Cambridge prices still seem to continue to defy gravity.

It's amazing what you can do by borrowing Trillions from our children for ZIRP, FFL, HTB etc to buy 2015 votes