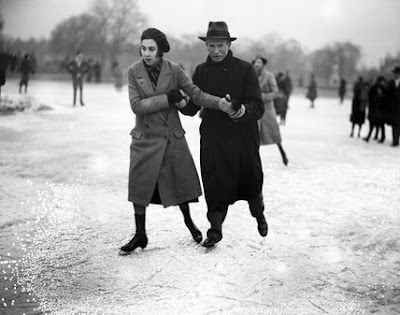 Slip-sliding across the sort of frozen pavement that causes fallers and shattered limbs in the elderly population, I can’t help wondering if the probate business might pick up in a month or two. Every cloud has a silver lining.

‘Spare some cash for a cuppa?’ Calls a gruff voice as I sashay sideways like some inept celebrity, dancing on ice. I spot the unshaven tramp-like figure lurking in a boarded up doorway. The unit will shortly become a charity shop, which might help the dishevelled man eventually, or heaven forbid, another estate agent that most definitely won’t.

I’ve spent a couple of decades avoiding wastrels and beggars who plead for funds to fuel drinking and drug habits while I work fifty hour weeks to keep a roof over my own family’s head, but lately as I attend yet another repossession, I’ve started to think but for the grace of a god I’ve seen no sign of, it might be me one day. With my sales experience I’d hope to make a more convincing case though - there’s no way this guy would spend any money on a mug of tea.

‘Sorry mate.’ Says a voice I recognise and I hurry on and nearly take a tumble for my troubles. Black ice and an increasingly black mood will have me falling sooner or later. A phlegm-filled expletive is spat in my direction as I hurry on towards the office. I think another wino might just have realised my profession.

‘It’s cold in here.’ I say out loud as the ringing of the just-silenced alarm fades away. The talking to myself has become an all too regular occurrence. I’ll be stopping strangers in shops soon on the pretext of not being able to reach some item on the top shelf, them trying to engage them in conversation. Only a short step to asking estate agents to come and value my home, when I’ve no intention of moving.

I punch the heating control to no avail. The bloody system isn’t firing-up again. I can see my breath in the air and a quick glance at the thermometer confirms a temperature that the Shops and Factories Act might not find acceptable. I have a feeling the guidelines state something like 16 degrees centigrade, or 13 in an active environment. Not sure if folding leaflets for a chilly drop later, counts as active, so I decide to hide the thermometer instead.

‘Bit parky in here isn’t it?’ States assistant manager T, arriving moments before opening time. There’s still no sign of the other staff.
‘I hadn’t noticed.’ I fib, cheeks colouring and sending a little warmth my way.
T marches to the heating programmer and fiddles with the buttons, as he presses and curses the rest of my team arrive, puffing and stamping feet.

‘Heating is f***ed again.’ Announces T unhelpfully.
‘What’s the thermometer say?’ Asks lettings lush B.
‘It’s not on the wall.’ Replies T turning to look at me accusingly.
‘Tea or coffee guys.’ I ask, using a well-tried distraction technique.
‘If he’s making drinks there must be a catch.’ Rumbles obese mortgage man M. No danger of him getting chilled to the bone.

‘Isn’t there a statutory minimum temperature you have to have, or you can go home?’ persists B despite the viscous black coffee I’ve made her.
‘It’s just advisory.’ I tell her to less than convinced glances. ‘I’ve called the engineer. I’m sure he won’t be long.’ Both statements lack credibility but I’m betting the former will be the more accurate.

‘Oh great.’ Moans T, looking out the window and sipping on his own tea.
‘What is it?’ Asks negotiator S, hunkered down over something hot and steamy I’ve provided. For clarity, her coat and my trousers are still on.
‘Mad Mrs Munroe.’ Replies T. ‘Hasn’t she got anything better to do?’ Probably not, her husband died some time ago and like a lot of people she’s been fantasising about property and a second coming for years.

‘Nothing for you today Mrs Munroe.’ Says T heading her off at the door. The poor woman looks confused.
‘You know my name?’ He’s been in her bedroom three times, despite the sign on her front door.

If only they each bought a copy of the book ;)

I was thinking a Boots low-calorie meal deal and not answering any emails for 24 hours, Henry..
S.A.