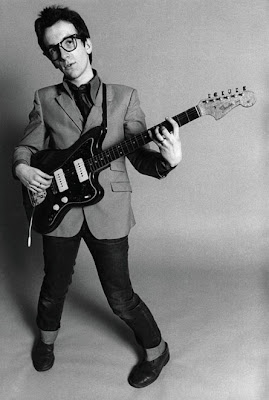 The tie is new but everything else is the same – although the suit trousers seem a little snugger. Still not sure about the pattern if I’m honest, there was a time when I thought I’d never succumb to the tyranny of the tie, aside from a brief dalliance with some skinny versions when punk softened to new wave and I bought the first two Jam albums on the spin. But you junk ideology as rapidly as you take on mortgage and overdrafts.

‘You don’t like it do you?’ Asks my wife softly. For a moment I think it’s a general observation, predicated mainly on the mother of all Mondays – the first day back at the start of a fiscal year, when the clocks have yet to change but the targets are all re-set, and a statistical mountain looms ominously. But she’s talking about the tightly knotted present.

‘It’s fine.’ I lie, as I look in the mirror and see someone vaguely familiar, just older and greyer, staring back at me.
‘I have the receipt.’ Says my wife flatly. She knows. She always knows.

The road looks the same, washed in that orange streetlight glow which makes the scene resemble something from Blade Runner, only with high mileage Fords rather than Harrison Ford. The fastidious car cleaner is just leaving for work, his motor gleaming irritatingly. He catches my eye.

‘Happy New Year.’ He trills in a singsong voice. He doesn’t mean it, I don’t want to return it, but we both engage in the meaningless ritual. He’s something in figure-fiddling so probably has the same handshake as my bean counter boss - and he knows what I do, so he can’t really be wishing me well for the next twelve months of property market mayhem. We get blamed when prices go up, chastised when they go down.

I wave him on, as both cars look to leave at the same time. His headlights battle with his paintwork in trying to dazzle me. It’s as bright a start as I’m expecting, judging by previous years. A salesman needs resilience and a hide like a Rhino, but it’s a finite resource. I may have the right skin now; with the wrinkles and furrows deep enough to plant seedlings in, but my patience is wearing thin.

The drive is familiar - and contemptible. Fewer four-by-fours are out and about, as the school run has yet to recommence, but the usual collection of blank-eyed representatives are queuing nose-to-tail and that bastard in the JCB seems to be somewhere up ahead, judging by the orange flashing light moving at five miles an hour above all the exhaust-belching saloons.

‘Happy fortieth Shane.’ I mimic, as the car crawls under a hand-written banner, flapping mournfully from an overhead footbridge. ‘It’s all downhill from here Shaney-boy.’ I pronounce, wondering just when someone named Shane started to reach his fourth decade? Time marches on, I guess. The probate sales tend to be peopled by Arthur, Anthony, Mary and Margaret, so Shane is halfway there.

The car park is filling rapidly and the park itself still littered with takeaway boxes and a couple of early-rising winos. I take a wide route round both sets of detritus and spot the office window. A light has failed over the holiday period and I toy with just leaving it to see how quickly another member of staff spies the, less-than glaring error – but Easter is a long way off. I’ll be on the Diazepam by then if it remains that gloomy.

The answer phone is flashing insistently. I’m not expecting too many more Happy New Year greeting on this tape. I’m not disappointed – but then of course I am.

‘Happy New Year.’ Offers assistant manager T as he becomes the first to arrive, thirty-three seconds before start time. He knows too.

‘How many fall-throughs over the holiday?’ Asks T shrugging off his coat nonchalantly. It doesn’t seem to wound him as deeply as me – but then he’s not on 10%. I tell him.

‘So we’re on a minus figure before we start.’ He concludes accurately.
‘Ah-ha.’ I reply. ‘Everything is less than zero.’
T looks at me quizzically.
‘Elvis Costello.’ I tell him.
‘The dead Elvis?’

Keep up the writing SA, although it wouldn't hurt for us to hear about your triumphs once in a while (you must have a couple at least!!!).

Brilliantly observed and a good start to the year from a literary perspective if not the business. Happy new year and good luck!