Let There Be Light - Tuesday 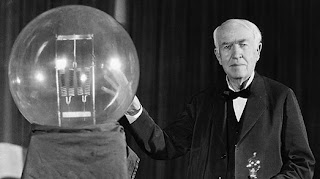 I spot it immediately. As obviously jarring to me as an unsightly gap in an American’s smile. And this doesn’t need thousands of dollars in dentistry charges, plus several uncomfortable months of incisor-shifting ironmongery in your mouth just when you are at your most self-conscious. A light bulb is out in the office window display.

If you are an all too obviously imperfect perfectionist, you are cursed by such small afflictions that others - particularly my staff - don’t seem to register. I’m twitching like a strung-out junkie even before the burglar alarm has stopped ringing and I’ve scanned the post with a practised eye that spots cheques and complaints with equal alacrity. I’m half way towards the stationery cupboards when I pull up short.

‘No.’ I say to a booming, empty-spaced echo. ‘Let’s just see who notices first.’ Even as I utter the words I know it’s probably a mistake. Not just the talking out loud, but the setting myself up for an agitated morning of frustration, which will only grow out of all proportion to the simple solution of un-boxing a fresh bulb and replacing the dead one – just like I always do.

‘It’s a point of principle.’ I announce haughtily, even as that nagging internal voice reminds me that principles have sunk better men than me - much better men. By the time assistant manger T strolls in suppressing a languid yawn, I’m staring at the dark place in the window obsessively. He doesn’t notice.

‘Morning.’ Announces negotiator S breezily, as she arrives in a wash of perfume and the blouse that stops traffic on warm days. But annoyingly she doesn’t spot the yawning black hole that says to me - and surely anyone looking in the window - that we don’t care. That we are unlikely to sell their house for twenty grand more than its worth if we can’t show it in a positive light…

Big mortgage man M arrives, podgy paw clutching another sweating Greggs bag. He waddles to the kitchen with what might be a grunt of acknowledgement but could just as easily be a suppressed fart. Unless he wants space for a pre-vetted financial services advert - with more small print than a midget’s memoirs - he barely looks in the window. He’s swiftly followed by B our lettings lush. She looks wickedly hung over again and I’m guessing won’t focus on the window, or anything else, until mid-morning and three cups of coffee down.

I’m now muttering under my breath about uncaring team members, a lack of awareness, and scowling at the offending light fitting with what is bordering on malice. As if the gloomy space is some entrance to a malevolent underworld peopled by cackling surveyors clutching red-hot pitchforks, all downvaluing manically while cloven-hoofed solicitors pile endless unread files on smouldering desks and refuse to take my calls.

F the trainee - appropriately enough from hell - doesn’t lighten my darkening mood by turning up late and flustered again. I don’t believe the traffic accident story one jot as he has no sign of blood on him, other than another badly staunched shaving cut. After a lacklustre morning meeting, I begin to drop heavily ironic clues. I know sarcasm is the lowest form of wit but I’m drawn to it like a magnet to metal.

Asking for bright ideas and requesting someone illuminates me on where we could improve proves fruitless. I leave for a valuation appointment, hoping against hope someone will spot the spent spotlight and replaced the bulb before I return.

Midway through the afternoon, several appointments in, and I have the lighting equivalent of the golfing yips. I’ve found myself in the stationery cupboard at least twice. Fondling a Philips GU50 watt box obsessively, aching to just climb in between the 6 x 4 displays and sort the problem myself, but doggedly I wait.

‘We’re off then.’ Announce T and S as I sit shaking with frustration at the end of the day. Then T turns and asks. ‘Do you want me to get the lights?’ Elatedly I think he’s realised, but he just clicks off the main overhead panel and leaves.

I’m totally in the dark.