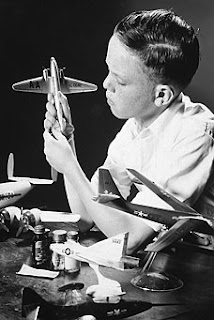 ‘It’s too big for us you see.’ Proclaims an early-sixties woman with a certainty her ancient husband’s eyes fail to confirm. He just looks frightened about the prospect of moving - and that’s before we start discussing price and fees. But the formidable lady is not for turning – at least not yet.

‘And this was my son’s room.’ She informs me as we reach a door on the upstairs landing, elderly husband left slumped in a worn chair in the sitting room. The door has a faded name sticker in the centre and I’m hoping it’s not one of those dead offspring shrines some people keep. Fortunately she informs me he’s alive and kicking with two lovely grandchildren she doesn’t see enough, as we enter the dusty domain.

Unnervingly, it’s like a time warp back to my youth. A tattered Led Zeppelin poster hangs crookedly on one wall. An ancient bedstead with a candlewick spread sits in the middle of the room and a shelve groans under the weight of over a hundred gatefold LP sleeves, all fastidiously clad in plastic protective covers. As the woman drones on about Christmases past, I tilt my head and read the titles. Pink Floyd, Bad Company, Thin Lizzy then the sudden shift to The Sex Pistols, The Damned and The Clash. It’s spooky.

‘I don’t like to change it in case he ever comes back,’ the woman mumbles wistfully, before adding brusquely. ‘Of course that’s nonsense, which is why we’ve decided to sell up for something more manageable.’ You’ve decided, I think uncharitably. The old boy downstairs didn’t seem convinced. People like stability and the comfort of familiar surroundings at his age, but then she’s probably at least ten years younger than him and destined to live another ten on top.

‘Spain?’ I say as neutrally as I can when we’re sitting back downstairs and the lady of the house reveals her preferred destination. It’s a mistake I’ve seen made time and time again. It’ll be an expensive one with the market even shakier than here.
‘Yes,’ enthuses the woman. ‘You can get so much more for your money there.’ There’s a reason for that love, I almost say, before remembering where I am – and more importantly who I am. Equilibrium retrieved, I sit and look at some snaps of their last holiday there and wonder if a developer can break their overgrown garden in to a couple of plots.

‘Of course our son is dead against it.’ Croaks the old man defiantly and he waves a hand at the mantelpiece where a saggy-faced man, with no hair, who looks fifty if he’s a day, squints uncomfortably at the camera. That’s probably because he’ll be missing out on free babysitters, I think briefly, before wondering how the hell the guy has aged so badly if he came from the same school year as me?

Then I catch myself in the mirror and suddenly I’m not even listening to the couple. I too look like s**t. I too had Catcher In The Rye and Catch 22 on my bookshelf. The same dusty board games upstairs, Monopoly, Scrabble and a Subbuteo pitch pinned to a lump of chipboard, were lurking in my room along with a pile of back copies from The Victor comic. I’m hoping the guy in the picture frame isn’t feeling as washed-up as I do, or he won’t last long enough to inherit an un-saleable concrete box with damp problems, on the Costa del Sol.

‘Do you think we’re doing the right thing?’ Presses the man, as his wife tutts audibly. I hate it when they want an honest answer. Of course I want their house to sell, it’s how I make a living, but a withered shred of conscience the boy with the Airfix model collection might have recognised still lurks inside.

‘Of course.’ Chimes a familiar voice – I never was any good at making kit Spitfires. ‘You’ll feel much better with the temperatures out there.’ And overplaying it wildly, I add. ‘All those little aches and pains seem to vanish when the sun shines.’

I console myself with a sole agency and a board and the chance to flog them a retirement flat when they return chastened and poorer.
Posted by secret agent at 7:38 AM

I know you're an old hand, but didn't you miss a chance to both be kind and make another sale with it:
"A lot of folk find when they sell a house as nice as this they can afford a place in Spain and a little something near the grandkids in England too."
Then you get to offload one of those flats that first time buyers can't afford at the same time as selling their current place. Self-contained chain SA - quids in?

Oh dear, more lambs to the slaughter. As a Spanish expat still young enough to have to work
for a living, I´ve seen so many pensioners make this mistake. For God´s sake do the right thing and tell them to rent over here, for when it doesn´t turn out quite as
nice as in the borchures!

I do agree with China Reader in the possibility of making another sale from these vendors.
However as an Agent myself, I know that sometimes these thoughts do not occur to you until its too late!