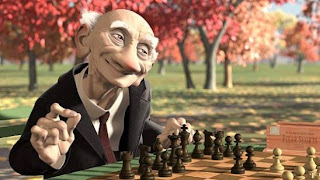 Up goes the hording around a choice development plot I’ve driven past a thousand times. I’m cheesed-off on dual levels. One I’ve missed an opportunity for commission and re-sale kickbacks. Two, another retirement home will soon be sprouting from behind the boards. The vast concrete-pouring hopper will shortly be rising over unconvincing adverts of active retirees, with hair and teeth too good to believe, cavorting in the autumn of their lives’ sunlight.

The lure of these places just escapes me. But then I’ve tried scores of times to shift the re-sales for tetchy beneficiaries, once the bill for the undertaker has arrived and the ashes been spread somewhere the surveillance cameras couldn’t track. Brand new, these scaled-down apartments suitable for some sort of wrinkly Gulliver’s tale traveller exert an unfathomable glossy allure. Elderly people whose partner has croaked, and who grew-up with an outside toilet and a mild dose of polio, are attracted by the cleverly marketed illusion.

‘Are you sure it will be the right move for you?’ I fish gingerly, as I sit before an ancient mariner type whose wife – unusually - has died first. I have to be careful, as the retirement developer is offering so-called chain-breaker part exchange deals, for those gullible enough to pay way over the odds for their one bedroom box. They send along agents to value the old person’s home, then we forward a fair market value figure to the sales department, who as far as I can ascertain, then lop fifteen percent off for the privilege.

‘Oh yes,’ dribbles the old man, with more decisiveness than you usually find in pensioners. ‘They’ll buy my house and I can move straight in.’ Perhaps he’s been enticed by the almost 80/20 ratio of females to males in these institutions. Maybe he’s hoping for some wrinkly action involving vacuum pumps and petroleum jelly.

‘They are safe and secure.’ Continues the old boy as I desperately try to shift the unpleasant vision - like the parents shagging trauma – of crusty-couplings in the communal lounge. ‘And there are pull-cords if you need assistance.’ Not for what you are thinking, I imagine uncharitably. ‘
‘We might be able to get you a better price if you sell on the open market.’ I venture, as I leave. It’s a tricky pitch, if the sales manager at the retirement builder finds I’m trying to chop him out of the loop all hell will break loose.

‘Oh I just want an easy ride at my age.’ Counters the wannabe lothario, bringing the unsettling image I’ve only just vanquished, back with a cobwebby vengeance. It’ll cost you, I think as I drive away. It always does.

Even with twenty grand lopped-off the original sale price six months down the line you are battling against, not only the unsold new units, but also the clinging odour of death that inhabits the flat. That and the smell of stale urine and those unsightly stains on the man-made carpet pile.

‘Mr Brewer on line one.’ Announces negotiator S with an apologetic air. ‘Wants to know how we are getting on with his mother’s flat sale.’
We’re not. She’s still alive racking-up care home bills in the thousands, but progress on shifting her second-hand sheltered shoebox is showing signs of rigor mortis.

‘I just don’t get it.’ Ruminates Mr Brewer after I’ve told him we’re struggling to find a buyer. ‘The sales people told mum there was a huge demand for the building when she bought.’ I decide not to state the sodding obvious for once and push for another price reduction. The management company, who levy absurd maintenance fees, are also trying to flog several vacant units. Gratingly, their for sale boards are the only ones allowed.

‘I’d move in there myself if it wasn’t for the age restriction.’ States Mr B ruefully. I agree gently, thinking it might yet come to that pal. Then sympathise over the galloping ground rent and monthly expenses, all serving to make his power of attorney ordeal even more onerous than it already is. With his mother on a drip feed the only thing she’s eating away at is his inheritance.

Another five grand off, but I’m still not hopeful.
Posted by secret agent at 7:52 AM

Too real to be really funny.

Razor sharp observations once more though.

Really angers me people taking advantage of old people, would hate to see that happen to my parents in their later years.