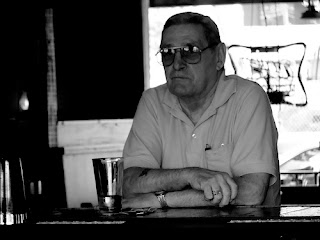 ‘So what happens now?’ Asks assistant manager T as we sit at the morning meeting. No offers in the message book from the weekend staff and a diary, light on appointments. All eyes turn to me, apart from lettings lush B who is filing her nails with band-saw intensity, faint burning whiff mingling with her powerful perfume, which still doesn’t conceal the tang of stale alcohol.

How am I supposed to know?’ I wonder testily. If I could predict the future I sure as hell wouldn’t be sitting in a mid-table estate agency office with a bunch of individuals only chance and a failed academic record placed me with. A latter day Nostradamus would hardly spend his days measuring-up over-priced pads for ungrateful vendors. One trip to the lottery ticket seller and he’d be out of here.

‘You get this every election,’ I finally venture, in lieu of a flash of lightening and six numbers being etched across the carpet, in a charred nylon-tuft-twist revelation. ‘Indecision until it’s clear what the government’s housing policy will be.’
‘Is it ever clear?’ Asks T with a shrug. Once again the assembly look at me as if I’m a property oracle, not just an under-performer in a suit.

‘What I don’t get….’ Begins trainee F to a chorus of groans. But for once I’m glad the imbecile has spoken, if only to take the weight of expectation from me. His stuttering request for someone – anyone – to explain a hung parliament, has me half-tempted to make some cheap gag about Mussolini and discredited leaders being strung-up from lampposts. Fortunately negotiator S gently talks through the situation like some busty television presenter - who most definitely would flog a few of those 3D sets - as I realise few of my staff would know who Mussolini was. F would probably think he’s a pasta dish.

‘So we’re out of this country as soon as we can.’ Informs a potential vendor as we wait for political clarity and another interest rate announcement. He and his sun-wrinkled wife have decided to buy in to Spain. I should warn him of the mailing list full of marooned ex-pats wanting to come the other way, but I need the business.

I have several ex-clients, one old lady in particular whose husband croaked within twelve months of arriving by the communal pool, wanting to return for the language and the NHS. Not sure if either will still be first choice when they finally sell their concrete cave in the sun. The Spanish market tumbling faster than a failed trapeze artist.

It take a few months for the émigrés to realise sitting in an air conditioned mock English pub because it’s too hot outside, sipping piped cold Guinness and watching piped Sky Sports, is an empty experience. Particularly, when the only person speaking English to you is some sunburnt Geordie landlord, whose gold jewellery is now worth more than your home.

‘Will I still have to pay for this Home Information Pack if I hang on until we get a proper Government?’ Asks the shrewish man. I don’t know the answer any more than the questions posed to me earlier, but I bluff as usual. Anyway, the bean counter boss now thinks the superfluous documentation, with built-in obsolescence, is a good earner. ‘If you can net a hundred quid per instruction, just get them on the market and worry about the price later,’ He instructed at our last sales meeting. ‘Another income stream to augment the sales channel.’ I’m in the wrong place. No question.

‘Do you think we’re doing the right thing?’ Questions the woman earnestly and I look at her, conscience clashing with those perpetually running profit and loss figures. She could do with staying put and spending the cash on a decade’s worth of holidays, ideally somewhere northern European with a bit of culture - and a bit less sun.

‘Many of my clients have done the same as you.’ I offer with a MP’s smile and about the same amount of integrity.

Back at the office, the political posturing continues, interest remains remain on hold and so does my career.

I should vote with my feet.
Posted by secret agent at 9:53 PM

HIPs out then. Bean counter won't be pleased!

Keep up the good work.