Stop Me And Buy One - Friday 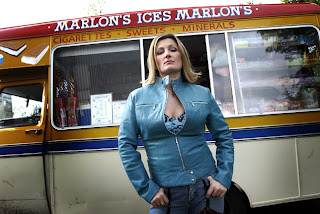 ‘How do you reckon she’s getting on?’ Asks assistant manager T sadistic glint in his eye. It’s the look only seasoned salesmen can exhibit, knowing they’ve stitched a colleague up more comprehensively than a surgeon at a suture seminar.

‘Not good.’ I answer glancing at the clock then across at lettings lush B who fixes me with a steely glare. She watched the situation begin a couple of hours ago and despite the fact she’s probably half-pissed again, she knows when the public are time-wasters. It’s a shame she can’t be so astute in her private life.

‘You lot are all the same.’ She chides, as I feel the uncomfortable swell of regret building even further than when I allowed the scenario to unfold. ‘It’s no wonder women don’t want to be in house sales.’
‘That’s not true.’ I answer, less than convincingly. The fact is, no matter how many gender equality courses they send people on, men still outnumber women on my side of the office, and the opposite applies to B’s discipline.

‘All men are sexist pigs.’ Proclaims B with the absolute certainty only an emotionally incontinent zealot - or a gin-washed tart can muster. It’s the type of contentious phrase that women on a course can spend hours analysing. Filling several A1 flip charts, wallpapering entire conference rooms with gently flapping yellow sticky notes, while the blokes look at the legs of the facilitator and wonder if she’s as angry in bed?

Negotiator S is out on a run of appointments with a poisonous pair of house-hunters. The sort I, and clearly now T, recognise with about ninety percent accuracy. Truth is you can never pigeonhole every buyer by clothing or demeanour. But you have to take a balanced business decision on whether to spend several soul-sapping hours with messers, against the off-chance that they might actually make an acceptable bid, be able to perform, and not pull-out several weeks down the line. It’s why T let S do the viewings.

In sporting parlance it’s known as a hospital pass. Leaving a teammate exposed and liable to some sort of damage. Invariably it’s emotional rather than physical, but after a while that hurts just as much – more so sometimes. If staff earn individual sales commission rather than a group, pooled system, the diary shuffling becomes even more machiavellian.

The door bangs open and S pounds in, breasts bouncing distractingly, face like thunder.
‘Jesus,’ she exclaims. ‘I could swing for some of these people I really could.’
‘No good?’ Asks T mischievously.
‘Do bastards like that ever buy anything?’ Snarls S
‘Everybody has to live somewhere.’ I remind her, with a mantra I probably pinched from another long-distant sales course. But it’s as unconvincing as T’s smile of sympathy.

‘She was a cold-hearted cow.’ Rages S, gander up now, as I think probably didn’t want you sweet-talking her partner with that blouse on. ‘And he,’ continues S, ‘Was a pompous prig who criticised everything I showed him.’ Not everything, thinks a distracting internal voice that becomes more vocal with time. If it ever speaks out loud it’ll be time to go.

I can fill in the gaps, as S rages on and T tries not to giggle. They haven’t moved for ten years, live in bland box that has you wondering how they ever committed to buy it in the first place, if they are so pigging picky. He snipes at the presentation and the price, she criticises kitchen-size, lack of a wood burner and garden orientation, and they both rail at the fact that estate agents don’t understand their needs.

In the unlikely event you find something they like, you’ll have several other purchasers in a much stronger position than they are. Chances are, they’d want the owner to accept their chiselling offer, then take the property off the market while they try to extract over market odds for their own pricey pad. The likelihood is they’ll only move following death or divorce.

‘Cup of tea?’ I offer guiltily, feeling B’s beady eye on me.
‘I’ll need sugar.’ Sulks S magnificently, before adding. ‘Can I take them off the mailing list?’

What do you think I said?
Posted by secret agent at 8:10 PM