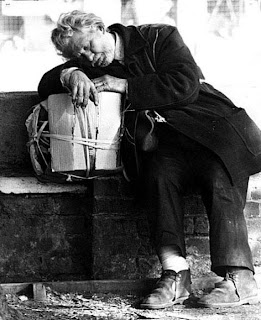 Walking through the park towards the office I dodge a sleeping drunk slumped on a bench, clad only in a grubby blanket and a few discarded newspapers. I half expect to see some calamitous property headline on the print as I glance down, but that would be too obvious. Just another Premiership footballer’s peccadillo’s exposed – nothing about confused property purveyors and conflicting emotions.

As I approach the door, a stomach-gurgling foreboding coupled with a frisson of excitement, shivers through my core. Have they missed me, I wonder? As I scan the window display like a poker player swiftly inspecting his hand. Nothing much seems to have changed I think peevishly, as I stoop to open the door and wonder if absence has made the heart grow fonder or if, with the lack of new instructions on display, familiarity has bred - at best - complacency.

Then as the alarm chimes insistently, a ghoulish chill hits me like a slap.
‘Aw come on.’ I grunt to the ceiling as I realise the last clown in the office has left the air conditioning running full tilt. ‘Can’t they cope without me for five minutes?’ I question as I punch the familiar numbers into the blinking pad and the bell falls silent. I’m angry, of course I am, but secretly I’m a little pleased.

With a start I’m disturbed by another more intimate ringing and I realise my mobile phone is buzzing insistently in my pocket, the battery sending little pulses of electricity through my frame, as I fumble to extricate the handset. As I punch the green button I recognise that it hasn’t rung for the best part of a week.

‘Oh hi boss.’ Croaks a familiar voice theatrically and I realise it is F, the comedy trainee. His attempt at a sick day timbre is as unconvincing as my get well soon platitudes. ‘Liar.’ I snarl at the mute Nokia, once I’ve terminated. And so it begins.

Glancing round my office door, the lack of phone contact from staff whilst I’ve been away troubles me vaguely. Is it a foretaste of the “clear your desk, here’s a bin bag” isolation I might experience should my fantasies of leaving – either through choice of compulsion – ever come to fruition?

‘No, you can’t do without me.’ I call triumphantly as I see a mound of unopened post on my desk. A testament to how much my services are required, I think pompously until a nagging inner-voice taunts: Or maybe a masterly piece of buck-dodging by T the assistant manager? Spurning the buff coloured pile momentarily I start to prowl the office looking for clues of activity.

The weekly stats are too obvious. I’ll check them later, for now I’m scanning the message book. This much-thumbed tome occasions several groans and the occasional yelp of delight, as I see scrawled evidence of sales faltering, offers withdrawn, calamitous surveyors’ reports and sporadic soul-lifting notifications of exchange of contracts.

Swiftly, as the clock ticks towards arrival time, I peruse the viewing book then despite myself I spot an open daybook. Like some paranoid partner grubbing through the linen basket searching for signs of infidelity, I find myself checking individuals’ notes on a typical day. Each scribbled entry as revealing as any clothing blemish, to the trained eye. Then the door rattles and I jump like a cattle-prodded calf.

‘Welcome back.’ Chimes T with what might be taken for sincerity, had I not been in the selling game so long. ‘How’s it been?’ I ask backing away from the evidence and hoping he hasn’t noticed I’ve been checking negotiator S’s notes. ‘Some ups and some downs.’ Replies T adroitly, succinctly summarising the job in one seemingly fatuous phrase.

As I await the arrival of the remaining staff I ferret through the statistics and a first draft of the profit and loss accounts. The utilities columns is going to take a hit once the cost of running the air conditioning for several nights filters through, I think morosely, as I realise we’ve gone forward two steps and back about the same.

With a deep breath, I gather my composure and start all over again.
Posted by secret agent at 8:55 PM