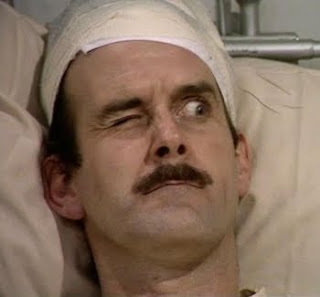 ‘Just don’t call the office they can cope without you for a week.’ Instructs my wife as we set off for a half term break. But already my fingers are itching to push auto-dial on my mobile, before we lose the signal.

‘You know what they are like.’ I whinge amiably, while we move into unfamiliar territory, both geographically and relationship-wise. With eldest son at university and youngest on an “educational” school trip abroad, we’re on our own for the first time in years. I’m hoping we’ll still have something in common.

A few hours later as we arrive at a dismally damp seaside town and I argue with both my wife and the irritating female voice on the satellite navigation instructing me to “turn round as soon as possible”, the desire to ring is tugging at me like a smackhead desperate to call his dealer.

‘I wonder how he’s getting on.’ Speculates my wife and momentarily I think she’s thinking about T, my assistant manger, until I see her scanning the youngest son’s itinerary. Does that make me a bad father? I just pray it’s not hereditary.

‘And what do you do?’ Asks the slightly officious landlady, at the boutique bed and breakfast we’re checking in to, and my mood mirrors the weather as she engages and asks animatedly. ‘So what is the market doing?’

‘Terrific.’ I mumble as we close the door to our room. ‘Yes it is nice.’ Chirrups my wife, opening cupboards and checking the tea making facilities. ‘I meant, she’ll be wanting to know how much this place is worth.’ I correct, as I scan the room thinking like countless punters do when they ship-up at our well-photographed properties, that it doesn’t look as good as it did on-line.

‘Christ this town looks run-down.’ I conclude after we’ve trudged along the mist-shrouded sea front and gravitated into the chav-populated shopping precinct. Unit after unit is boarded-up or whitewashed out, and I’ve already spotted three failed estate agency operations, with a morbid mixture of glee and melancholy.

As we circle aimlessly round a tacky gift shop and I speculate just how they’d force me to cough-up if I did smash an ornament and was asked to “ pay for all breakages” other than hearts, a mobile phone bleeps.

Like arthritic gunslingers, we both reach for our hardware. My Nokia looks blankly back at me, no hint of apology on its inactive screensaver, while my wife coos in delight. ‘He’s answered.’

‘When did you text him?’ I quiz accusingly, as we exit without buying and I’m sorely tempted to tip-over a glass collectable, near the door.
‘While you were looking in that agent’s window.’ Mutters my wife, excitedly checking the hour-by-hour listing of where my son should be, on his culture, photo opportunity, fast-food adventure.

As rain dribbles down my neck I crane forward to see my son’s response and laugh out loud, to the consternation of the Big Issue seller sheltering in a vacant shop’s doorway. He doesn’t bother to pitch the magazine, as I cackle manically to my youngest son’s response to his mother’s earlier request, asking how he found the Vatican and the food?

Pope good. Hard Rock Café awesome. Reads the sparse but succinct response.
‘Score one for rampant capitalism and strike one for the Catholic Church.’ I giggle, suddenly uplifted, but clearly, not in a spiritual way. ‘I’m sure he’ll like the Colosseum.’ Mutters my wife, as I stop involuntarily at a lit window.

Through the familiar wire-strung displays, illuminated like a stage in the gathering twilight, I spot a familiar cast. A junior negotiator is standing by a churning photocopier. A bored middle-aged woman is filing her nails at the lettings desk, and a paunchy grey-haired individual in old man’s hitched-up trousers, and shirtsleeves, is standing over his co-ordinator as she taps out particulars.

Just as I’m thinking how the man looks an officious overbearing fool and how he’s obviously too old to still be selling, clad in a garish ill-ironed shirt and fastidiously checking-up on the poor girl’s typing speed when a modern manager would create his own details - my wife says. ‘Oh look, you in ten years time.’

It’s not a reflection I wanted.
Posted by secret agent at 4:01 PM

Were you by the coast? Isn't that depressing?

The occasional references you make about your father are more poignant that you can imagine. I feel for you on that score - it appears you've got unresolved issues (I'm not judging, just guessing; I barely remember my own father).

Finally, couldn't you have bought that Homeless guy's magazine? Come on. That was incredibly insensitive.

Very perceptive anonymous. According to my wife I am insensitive and do indeed have issues, they're just not Big ones -clearly....
S.A.