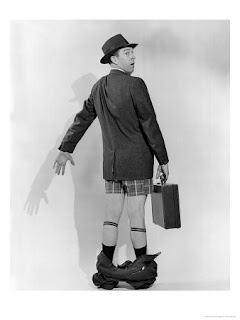 Bounce out of the house on an almost chemical high, sole agency form in my briefcase. Still the buzz is there when you land a great house on what should be an almost guaranteed fee, no matter how gloomy the market predictions. If only you could bottle these moments - hold on to the almost orgasmic joy of winning the business and better still turning-over the opposition agents - the job would be the best in the world. Then the doubts start creeping in.

By the time I’m walking back to the office and after I’ve caught a glimpse of the shuffling man in a shop plate-glass window, I’m wondering where the catch is. Was it a sympathy instruction? Did the owners feel sorry for a greying man in a suit who with better career choices and more application at school, ought to be CEO of a mid-sized Footsie 100 company?

Or are they complete nutters? Who, after we’ve spent several hundred pounds and countless man-hours marketing the house, will change their minds and decide to stay put because nothing out there is as “nice”, or as “ludicrously cheap”, as their own home. Or perhaps I was the only one to actually value the place and I’m not the slick accomplished salesman I briefly convinced myself I was?

By the time I approach the office, the high is a distant dilated-pupil memory and I’m convinced my fee was too low and I’ve overpriced the house.

‘You’ve just missed the most annoying couple ever.’ States negotiator S boldly, as I plod through the door, trying to adjust my body language to just the right side of cocky - appearances in property being paramount.

‘That’s quite a sweeping statement.’ I say to S, rubbing my chin theatrically. ‘But let me guess.’ Out of the corner of my eye I can see lettings lush B shaking her head and sneering, only I love an audience.
‘He was a pompous looking arse with an attitude and a body warmer. She was wearing a tweedy twin-set and pearls, and a face like a horse.’

‘How did you…?’ Begins S as B emits a groan of disgust.
‘And they wanted to downsize.’ I continue, the buzz from earlier returning pleasingly. ‘Been watching too much escape to the converted-stable-block bollocks on television, and want to sell high, buy low, pocket two hundred grand and still be able to fit all their grandmother’s period furniture in.’

‘You’re really good.’ Enthuses S as B sighs and lets out a muted. ‘Oh pleeease.’
‘Experience.’ I tell S tapping my forehead mystically. And as I’m on a roll I hypothesise a little further. ‘And everything you showed them they turned their nose up and said it was just too pokey, or in the wrong area?’
‘Yes!’ Confirms S, close to awestruck.

‘And one of them said before they left,’ I speculate, but with more than a little confidence. ‘Was what they really wanted to do was to pick their existing house up and move it somewhere else.’
‘Unbelievable.’ Exclaims S.
‘You got that right.’ Snipes B.

‘I know you were stereotyping right,’ ventures S haltingly. ‘But the descriptions were spot on.’
B throws a file on to her desk angrily and rasps. ‘For crying out loud love, he saw them coming out of the office, he’s not a mind reader.’
‘Really?’ Asks S, her face crumpling in disappointment. And I shrug, as B twists the letter opening knife another half turn, and adds. ‘A, he’s a salesman and they’re full of bullshit. And B, he’s a man. And they always have an agenda.’

‘I have got a new instruction.’ I offer lamely as the pair look at me in imperious judgement. As if I’ve dropped my pants rather than the ball. ‘Will it take a Welsh dresser, a twelve foot table in the kitchen and give quarter of a million change from seven hundred K?’ Questions S half-heartedly.

Back in my office I type-in my password and reflect on the fact that most forays into property, without judicious editing, end in disappointment.
‘Got an agenda.’ I mimic sarcastically as my e-mails unfurl and I get just that from the bean counter boss.

Item three reads: Performance review. No change there then.
Posted by secret agent at 8:36 PM

Well, well. It seems our very own SA is starting to get the praise he deserves!!! Try the following link everybody.

Many thanks Idler and likewise to whoever nominated me. I wasn't aware of this one. Perhaps people will spread the word and I'll go viral. I've definitely had a bit of a sniff for the last few days....
S.A.

I love this: ‘I know you were stereotyping right,’ ventures S haltingly. ‘But the descriptions were spot on.’

Great read :) Always ask yourself where is the catch!