On Your Marks - Monday 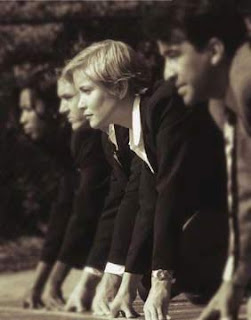 I’ve been awake since the small hours just watching the clock radio ticking off long minutes to the appointed time. Of course when you first wake up there’s that fleeting hope it might be Sunday, or you might have had a full nights sleep. Only you squint at the numbers to realise your eldest son is probably still out clubbing, then try in vain to halt the brain.

Hopeless, the cogs start whirring and malevolent spreadsheets scroll through your head mocking your inability to grasp the detail other than to know it’s a huge uphill struggle again. Then you think the central heating has kicked in early, until you realise it’s your stomach churning like a tumble dryer someone’s left some small change in.

‘Good luck.’ Offers my wife, the eternal optimist, as after a mute breakfast I hesitate on the threshold of another year in sales. The road is sheathed in ice, as is my car, and a cold wind is blowing literally and metaphorically. ‘It’s not about luck.’ I tell her sullenly and all the light goes out of her eyes. I should apologise for my surly retort, it’s not her fault I’ve underachieved. But instead the schoolboy inside wells up, and a frightened lad in itchy grey uniform, aches to say timidly. ‘ I don’t want to go.’

Eventually I peck her on the cheek and shiver as I step into a new fiscal year. Five minutes of scraping and spraying and I come back to collect my briefcase.
‘I feel like Ranulph Fiennes.’ I tell her searching for jocularity.
‘You look fine.’ She says. ‘You just didn’t sleep very well.’
‘I didn’t mean that.’ I snap back icily. ‘But thanks for the encouragement.’
‘You mean the cold weather?’ She tries valiantly.

‘Happy new year.’ Calls some other wage slave as we slip-slide across the skating rink of a car park. And our eyes meet momentarily. I don’t recognise him and he surely doesn’t me, or the empty greeting would be replaced by something more vitriolic.
‘Happy new year guv’nor,’ Entreats a bunch of rags from the park bench, as a claw-like hand extends. ‘Spare some coppers for a cuppa?’ Nothing changes.

Nothing changes apart from waist size, I think morosely, as I catch a glimpse of myself in the shop windows as I gingerly navigate the lethal untreated pavements. I’m looking portly which means most of January spent nibbling at those low-calorie meal deals, if I don’t want a load more redundant suits hanging in the wardrobe. The ties eventually come back round but a 32-inch long, is unlikely to return.

As I fumble with the office keys and circumnavigate what looks like frozen puke underneath the ice-glazed pavement, a woman tumbles to the ground behind me with a startled yelp.
‘Not often an estate agent gives you a helping hand.’ She jokes, face crimson with embarrassment, as I lift her up.

She’s unharmed apart from her pride but there’ll be plenty of fragile-limbed pensioner’s hitting the deck if it stays this cold, I think with a fleeting cheerfulness. All we need is the Swine Flu promise to come good and there’ll at least be an influx of probate work to swell our tired register.

Halfway through checking my e-mails, post to follow, when the team start to arrive.
‘Do I look fatter to you?’ Asks negotiator S as she sweeps off her coat and does a fetching pirouette.
‘You look fine.’ I say as non-contentiously as possible. One practical resolution, to stay clear of the coven of politically correct witches in human resources this year.

‘I’m watching the calories as of now.’ Announces B from lettings as she hurries inside. That’ll be diet tonic with the gin then, I think, but don’t say.
‘Off to the sales at lunch time.’ Pronounces assistant manager T. ‘Fancy a new suit or two.’
He looks a slender as ever, so it’s just a fashion thing.

‘Any chance of a cuppa?’ Wheezes portly mortgage man M as he balloons through the door. ‘Three sugars.’

Then trainee F rings in sick. Here we go again.
Posted by secret agent at 10:00 PM

Best wishes for the New Year and lets hope the book sells well!!?

I was in town yesterday, for the first time since Christmas, and walking round noticed that over half of the EAs have gone and the Halifax closes next week, so not a good New Year for some!

Dont you just like the first week in January! Having said that, we have had some promising enquiries for our property in Moraira so hopefully this year will be better.
Good luck in 2010 to you!