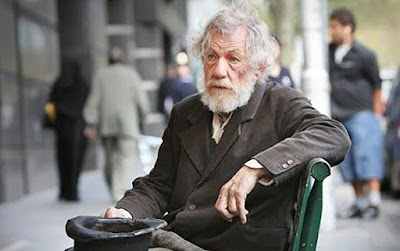 I'm early and the car park is fairly empty. They’ve tried to drive commuters in cars out of town with an expensive park and ride scheme, funded by local taxpayers, but guess what? If people have cars, they want to drive them.

I tried the park and ride once, but apart from being too far out of town I then had to wait fifteen minutes for a bus that didn’t take me to where I wanted to be. It’s not as if you can have a couple of pints after work either, because the bus times are sparser still and you still have to drive home.

Back aching, brief case heavy, I pass the pay and display machine and see the price has gone up again and then see a planning notice. I always read planning notices, there’s a possible lead for future sales with every one. This one isn’t too helpful though, the local authority are giving notice of intentions to close the car park and sell it off, so some pension fund can build student flats. Not even sensibly-priced homes for first time buyers, just a dash for cash with no joined-up thinking. No wonder town centre retail is dying.

‘Hold-up there mate.’ Calls a familiar voice as I head for the park. It’s not a phrase I want to hear. At my age and dealing with annoying people every day, the last thing I need is new friends - or as in this case an old acquaintance thinking he is one. It’s the banker with the dodgy hips.

‘Thought you didn’t hear me for a moment.’ Wheezes the money-lender, as he catches me up with a lop-sided hobble. I pretended not to.
‘Long time no see.’ He says with a yellowy-toothed grin. I know he’s about my vintage and I don’t need any further demoralising reminders of the ageing process. The shaving mirror has that covered.

‘How’s tricks?’ I reply, thinking most of your deceptions have been rumbled Shylock, since the PPI miss-selling fiasco. Not to mention discredited accident sickness and redundancy policies that didn’t pay out - unless you tripped over a Smallpox sufferer and lost your job in the civil service….

‘Crap.’ Says the banker flatly. Terrific. If I wanted manic depressive I could have stayed in my car.
‘Not shifting many mortgages then?’ I ask, wishing the walk across the park away, even if it means opening the office post and finding a solicitor’s letter telling me a buyer has pulled-out and not had the balls to tell me.

‘It’s all about sales and add-on policies.’ Bemoans the banker, with a familiar diatribe. ‘It’s not the same bank I joined from school.’
Too right it isn’t bucko. You’ve shut half your outlets and I can’t find a single teller position open, when I try to pay cheques in at lunch time. Solicitors still send them and will be one of the last professions to embrace on-line banking.

‘And did I tell you my new boss is only just out of university?’ Says the man, puffy face turning florid. He did.
‘And she’s a woman.’ He adds, unnecessarily. The she prefix gave that away.
‘Better get used to that.’ I tell him.
‘She’ll be pregnant and on maternity before long.’ Says the banker, with a look of distain. So, not his love child then.

‘All they want to do is cut costs, sell over-priced product and flog expensive accounts with monthly charges.’ Continues the banker. He’s struggling to keep up with me and doesn’t seem to have noticed I’ve picked up the pace by fifty percent.

‘I thought you were going to take redundancy and finish early?’ I say, as we swerve an early-morning beggar, with a can of super-strength lager in his hand.
‘Have a nice day anyway, gents.’ Says the rough-looking man, slurred voice heavy with sarcasm. You’ll probably have a better one I think, at least you’ll be pissed by lunchtime.

‘I reckon the whole economy could go belly-up, with all this financial uncertainty and this Brexit shambles.’ Concludes the banker, before adding. ‘Have a good day.’