Darkness On The Edge Of Town - Tuesday 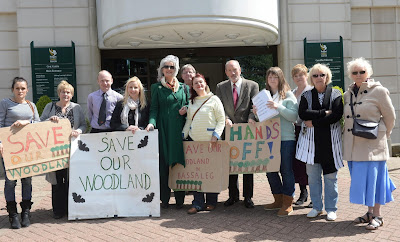 ‘See that field on the edge of town is in the news again.’ Says assistant manager T.
‘The one they’ve been trying to build on for years?’ Asks negotiator S, with a shake of her pretty head.
‘Yep. They just haven’t bribed the planners enough yet.’ Replies T, dryly.

T is joking, I think, but there are plenty of rumours of local government employees with unexpectedly large villas in Spain, on a meagre taxpayer-funded salary. If a few scruffy acres that can, at best, bring a sparse income from grazing spoilt-girls’ ponies, can turn into a goldmine at a stroke of a planner’s pen, it’s no wonder money is believed to change hands for the privilege.

If your acre of farmland is worth about £15,000 without planning permission and up to £1m with it, it’s not hard to see why any Willie Wonka will consider corruption and bribes, if it means they could get the golden ticket.

‘The local NIMBYs will be up in arms.’ Predicts T. ‘They’ll be arranging meetings in the Scout hut, with an average age of sixty-five.’
‘Yes, it’s always the old people who complain about new housing.’ Says educationally-challenged trainee F. ‘They’ve done alright, but they don’t want my generation to live anywhere.’
I don’t think he’s looking at me, as I still have a mortgage a third-world country would struggle to service. And if I have to once again remind my younger staff I once paid 15% on my home loan, there’ll be more groaning than an overloaded lift at a weight watchers convention.

F’s comment is an over-simplification - but then UK housing is nothing, if not complicated. It’s why successive ministers and governments have failed to get to grips with the crisis of too many people and not enough homes. The ridiculous cost of land - once it has that elusive planning permission - doesn’t help, as it makes up about a third of the cost of the final new build price. I’ve often thought if permission was conditional on a lower land price and final unit price, that some progress could be made, but like the Right To Buy (at a big discount) scheme, it would end up being abused.

‘Do you think they’ll get planning permission this time?’ Asks S, earnestly.
‘The wind is in their favour.’ I tell her.
‘Do they have to check for that, like a flood report?’ Asks F.
I know. I know.

‘They’ll be over-priced once they finally build them.’ Predicts T, sourly. ‘ Not sure me and my girlfriend will ever get to own something.’ Not if you keep taking out expensive phone contracts and wind every holiday on to your credit card, I think angrily. They imagine I was born with a detached house. The only silver spoon I ever owned was a cheap christening set that turned out to be pewter, when I tried to pawn it.

‘Prices need to get back to reality.’ Suggests B, from her lettings’ desk, before adding with a grin. ‘Although all the time they’re silly money, it keeps the punters coming to me for second-class rental properties.’
You can see why the public love us.

‘The problem is,’ I pontificate. ‘No government has had the balls or the vision to put in place a long-term planning strategy.’
‘That’s because they are long gone on a cushy pension, once the shit hits the fan.’ Says T.
‘The last lot to sort out inner-city housing issues was The Luftwaffe.’ I say with a smirk.
‘Was that an architect firm?’ Asks F, seemingly genuinely.
Until I shave, I often forget how old I am.

‘We could do with a major property crash.’ Says T. ‘Get prices down by a half and everyone would be ok.’
He’s forgetting I’ve lived through several price meltdowns and it comes with a lot of pain. Repossessions, negative equity and estate agents closing faster than the shutters at a bank, come lunchtime.

‘Will they build it?’ Asks S, later when we cross at the kettle. I’m starting to steam, she’s just hot.
‘Eventually.’ I concede.
‘Will I be able to afford one?’

I am so bored of hearing you baby boomers whine about your 15% (slight exaggeration) mortgages. I have to point out every time I hear the usual drivel that borrowing 30k at 15% for a few years would be a breeze to 400-500k at 2-3% for 25/30 years. With the former you have some chance of paying the capital down (and the high rate wont last forever). With the latter you are praying that interest rates don't rise, and for most ordinary people have little chance of paying down that sort of sum in any reasonable timeframe. BTW I am close(ish) to paying my mortgage off to its not sour grapes, just pointing out the obvious, being lucky enough to get in at the oh so reasonable 2000s(sarcasm)and trade-up before the most recent 40% increase in my area!

Bring back 2.5 times joint income limit, max 25 year mortgage and 6% interest rates! Oh and take all stamp duty back to 1% as it was before Labour screwed it over...