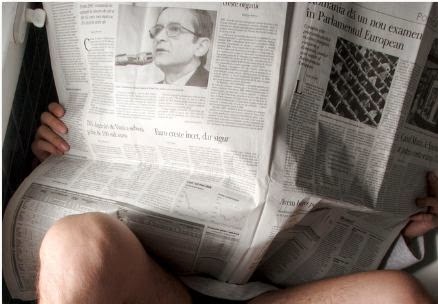 ‘Anyone seen my paper?’ I ask testily, back from a valuation appointment with a couple who’d been completely misled on value by one of the less scrupulous agents in town. It still irks when people respond to their baser instincts - greed in this case, fuelled by a semi-plausible spiv in a suit - and overprice their homes. But then never underestimate the power of price flattery when owners want to sell their homes.

‘No.’ Answers assistant manager T. Before adding. ‘Just off to get some lunch.’ He exits the office, as I think, when I was his age and aspiring to become a branch manager, I grabbed a sandwich at my desk rather than prancing round the men’s clothes shops for nearly an hour. So T hasn’t pinched my paper. Not this time.

I read the message book and grind my teeth when I see “Bomber” our local demolition surveyor will be carrying out a full survey on a pretty terraced cottage I agreed a sale on, three weeks ago. The house has stood for over a hundred years, but by the time he’s finished dismantling it in a twenty page report, the buyers will imagine it has less structural stability than a tottering tower of Jenga bricks. Might as well put the For Sale board back up now.

‘Did you see Bomber is doing 12 Coronation Terrace?’ Asks negotiator S with a wan smile.
‘I’m surprised he comes out during daylight hours.’ I growl.
‘Because people are out to hurt him?’ Asks S naively.
‘No.’ I snap. ‘ Because he’s afraid of his own shadow. I don’t think that bastard has ever valued up a sale in his whole career.’
‘Why does he do it?’ Says S.
‘Because you can’t get sued if nobody ever buys the home you valued.’ I tell her angrily. It’s not exactly true, but I’m not in the mood to show equanimity - particularly as some sod has taken my newspaper again.

My wife would say I’ve changed over the years I’ve been selling homes. I’ve certainly changed my newspaper pick. I started out with a  low-brow tabloid I’d rather not name, then as the years took their toll and the grey hairs flourished, I went from a down-market medium to a right of centre, mildly racist - in retrospect - paper, through to my current choice. Something a bit more nuanced and balanced, or at least I think so at the moment. I just hope I don’t get to the retirement flat and Daily Telegraph stage while I’m still compos mentis.

B our loose lettings lush sashays into the office. If her skirts get any shorter you’ll be able to see what she had for lunch.
‘You seen my paper?’ I ask frostily, as she sits behind her desk and starts to apply fresh lip gloss.
Nobody bar me still buys a daily paper, like a growing number they prefer to read the news on-line for free, but someone has to pay for the content. In this case me, which is why I’d like to find the paper where I left it - on my desk.

‘Why what’s in it?’ Asks B nonchalantly, starting to file her nails now, despite my frequent requests not to saw her cuticles in public.
‘I don’t know what’s in it.’ I bark. ‘All I’ve done so far is pay for the bloody thing.’
‘Swear box.’ Says S coyly.
‘Oh for f**ks sake.’
‘Twice.’

Then the penny drops. F, my cerebrally-challenged trainee isn’t around, but the last thing he read was probably his school timetable. M, our man-mountain of a financial advisor isn’t in his office. I look uneasily towards the gents’ toilet. S follows my gaze, as B files back and forth like a hyperactive violin player.

‘I think he’s in there again.’ Suggests S gently.
‘How long?’ I ask flatly.
‘Don’t think I’ve seen him for twenty minutes, come to think of it.’ She replies with an apologetic shrug.
Terrific. I like to grab a sandwich while reading my paper, but the thought the newsprint has been absorbing the earthy aroma of an overweight finance fiddler while he empties his bowels, isn’t pleasant.

If any kind reader wants to nominate this Blog for UKBA15 Awards, feel free. Self-nomination is so tacky and not really worthy of an estate agent...