Astride The Fence - Wednesday 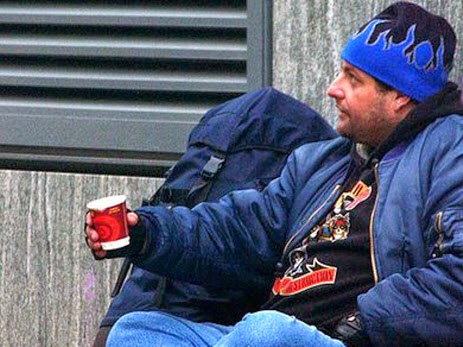 The early appointment was a waste of time, so I’m not in the best of moods as I hurry across the park, back to the office.

I’m guessing when the Victorians designated this green space they probably hoped it would become a haven for busy workers and perhaps somewhere to stroll hand in hand with a loved one on a summer’s evening. Instead, despite the local authority’s best efforts in the horticultural department, it’s frequented by the sort of homeless and hopeless people even I can’t help.

I spot the litter-strewn area from a distance, but I need to walk past. The gaggle of drunks are already garrulous with cheap super-strength cider, despite the clock not having reached mid-morning coffee time. I can feel a Daily Mail moment coming even before I have to circumnavigate the discarded bottles and food wrappers tossed into the nearby flowerbed. Dumped with total distain for the minimum wage gardeners who hoe out used condoms and spent needles in between the hardy weeds.

‘Spare some change for a cuppa mate?’ Demands one of the red-faced winos. It’s more an order than a request. His motley crew all turn toward me, eyes glazed, lips curled. One of them, I’m pretty certain was in the office a few months back, asking B our loose lettings lady if we rented to people on benefits. No wonder she drinks so heavily. Not so sure about the casual sex, but then maybe she gets better offers than I do….

‘Come on pal.’ Calls a second unshaven man, teeth like a yellowed piano keyboard. ‘Help out some people worse off than you.’ I could stop and have a chat, reason with the group that I give, in private, to the charities of my choice - the sort of line I used to give to the chuggers in day-glow jacket who try to get people to sign a direct debit order, when all they want is a sandwich and fifteen minutes away from jangling phones. I could.

‘Aw he’s not going to help you out.’ Spits a third piss-head. ‘Tosser in a suit, no chance.’ He’s right - on all three counts. I’ve been up well before the sun and I’m unlikely to start drinking inappropriately before six pm on a Friday. Why should I subsidise this bunch of anti-social low-lifes any more than I already do through my taxes? And yet…

‘Sorry lads. can’t stop. No change.’ I mutter hurriedly.
‘No change there then.’ Mocks a throaty female voice. I almost spin to double-check, but it’s true. One of the raggedy group belongs - or did at one stage - to the fairer sex. I shudder to think what the sleeping arrangement are on that park bench, particularly as they lock the public toilets now after dusk. Fact is you couldn’t see anything in there anyway. The ultra violet lighting that was supposed to make it difficult for you to shoot up, but just made it hard to hit those pineapple chunk fresheners they put in the urinals.

As I exit the park, a motorised council cart arrives with two downtrodden staff members inside. In the back are an assortment of gardening implements. I just hope they have sturdy puncture-proof gloves. Like some of those repossessions that have squatters in them, they’ll need to be careful what they pick up.

‘Dodge the aggressive beggars in the park did you?’ Asks assistant manager T, when I get to the office.
‘Bloody dirtbags.’ Voices B from her lettings enclave. ‘Why should we work fifty hours a week and be expected to give them more money?’
‘You don’t know what has happened to them.’ States negotiator S indignantly.
‘Bunch of losers.’ Counters B. ‘Try working in lettings and you’ll soon stop sympathising with scum like that. You should see the state the flat in the High street was left in, after the eviction.’

‘I just hope you never need to ask for help from social services.’ Says S. Eyes blazing. She’s magnificent when roused, at least I like to imagine so…

‘What do you think, boss?’ Asks trainee F with an unexpected curve ball.

And if you want property stories download the ebooks - links on the right.
Posted by secret agent at 7:20 PM