Meet In The Middle - Tuesday 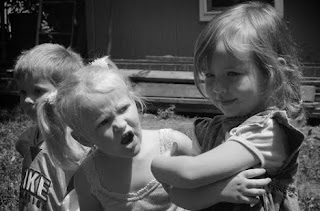 Achingly attractive Negotiator S, taps at my half-open office door. She’s an asset in the window but a distraction away from the public eye.

‘Can I ask some advice?’ She opens hesitantly. Yes, ditch the idiot you can do so much better, I nearly say. But of course she’s not after relationship tips, at least not that type of relationship. It’s a vendor and purchaser falling out, as they are prone to do when solicitors, surveyors and lenders all contrive to make them adversaries.

‘It happens.’ I reply, beckoning her to close the door and sit down. So much for the trite “door always open” policy - some things just have to be done in private.
‘People take offence at the funniest thing.’ I continue, as she tells me one of her deals is in danger of foundering as two couples bicker about carpets and curtains.

‘But a crappy bunch of second hand carpets and some tasteless drapes aren’t worth anything.’ Insists S sulkily.
‘It’s not about the value,’ I tell her sagely. ‘It’s about the principle.’
‘Sod principle,’ she responds feistily ‘There’s a seven grand fee on the line here.’
Suddenly, I’m even more focused on helping her.

‘Principles get in the way of common sense more often than you’d believe.’ I enlighten as she fills me in on the warring individuals, who when they shook hands on the deal were best of friends - always a mistake in my experience. It’s why selling privately is often a false economy. You fail to test the market comprehensively, run the risk of underselling by a margin far more than an agent’s fee, and lose the option of staying at arms length through the extended conveyancing period. Better for a third party negotiator to take - or ease - the flak. I’d rather be a hate figure than risk £7k’s worth of income.

‘People used to use the carpets and curtains as negotiating points all the time when I started.’ I tell S pointlessly. She looks at me with that endearing tilt to her head and I sense she is wondering if many homes even had carpets, when I first wielded a measuring stick. ‘Seriously?’ She finally asks. ‘What would they do with a load of off-cuts and curtains that wouldn’t match the décor?’ She has a lot to learn, a good portion of which I’m happy to help her with - short of a formal disciplinary meeting with human resources.

‘Look for a compromise.’ I tell S as I glance at my clock and remember a valuation in thirty minutes. I tend to lose contact with most vendors once the sales progress is in hand as I’m on the road trying to win fresh business. It’s the sharp end of sales. S needs softer skills to prevent the existing deal from going belly up.

‘They’re not in the mood for compromise,’ Responds S. ‘I reckon they hate each other now. I swear they’d each happily lose the deal if someone doesn’t back down.’ ‘That’s why you have to act as a buffer.’ I say swiftly, regretting the turn of phrase as S’s breasts heave agitatedly. ‘You need to find a release valve, ease the tension.’ I seriously need to work on my double entendres.

‘It isn’t really about the fixtures and fittings.’ I tell S. ‘It’s about not feeling you’re being screwed over.’ And now I’m wondering if some mischievous internal word goblin is deliberately feeding me suggestive lines? Hopefully she hasn’t even noticed. ‘Speak to them both,’ I coach. ‘Get both parties to give ground a little, then nobody feels they’ve lost. It’s the secret of good negotiation.’
I should set up a training consultancy, I think briefly - until I realise I’m too old for budget hotel rooms, political correctness and PowerPoint presentations.

‘If you really are in danger of losing the deal,’ I tell S cautiously. ‘Tell them you’ll speak to your manager.’ It’s the nuclear option, but if I have to chip in a few hundred pounds from our fee to keep the vendors sweet and allow them to give ground - and recycled curtains - I’ll do it.

I glow in the dark sometimes.