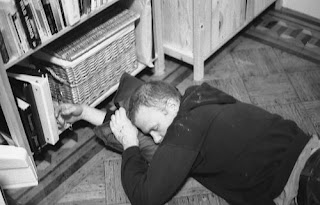 We go to a local post-wedding barbecue with my wife’s warning to behave myself, fresh in my ears. It’s an uneasy mix of “friends” by virtue of nothing more in common than postcodes, simmering tensions over parking rights, and noisy party issues. I’m thinking self-medicate with alcohol and a shady spot away from interrogation by televised property programme addicts.

I know enough about myself and others, to realise sunshine, booze and badly cooked burgers equals boorishness at best and salmonella and a scrap at worst. I learned early in my career, having watched the resident surveyor and the pompous prig from the commercial property section heading to the pub at lunchtime, that drinking during the day was not a good habit. Some drunks become garrulous, some sleepy, and others want to pick a fight, none good options if you’re climbing a ladder later or flogging a retail unit to the Salvation Army.

‘Oh God, it’s full of people I abhor.’ I say sotto voiced to my wife, as we arrive and I switch on default mode smile, with all the sincerity I can muster where a fee is not involved.
‘Just don’t say anything contentious.’ She hisses, as I scan the knots of people already formed round tables, sun shades and of course, the Aussie-sized gas barbecue.
‘How nice to see you.’ Gushes the lady host, towards my wife mainly, although she takes my proffered bottle of Rioja swiftly enough.
‘We wouldn’t have missed it for the world.’ Replies my wife effortlessly, clearly having forgotten my desperate scanning of the television schedules looking for excuses to cancel.

I manage to sidle away to the drinks table and procure a cold beer, avoiding eye contact but keeping tabs on the bottle of red. Several animated conversations are already in full swing. I sense trouble. The cauldron of Carlsberg, clashing egos and chardonnay, almost guaranteed to cause a commotion. I can only hope a couple of matrimonials and a forced sale or two are the end result. I have business cards in my shorts pocket.

‘So the estate agent eh?’ Accuses an acne-scarred man with bald head, and bovine companion. Several nearby conversations splutter to a halt and I feel steely stares coming my way – at least I imagine I do. People love to know how much their home has appreciated when times are good but they’re not so keen to take the hit when the economy founders. Either way, I get the blame.

‘We’re thinking of moving.’ Blusters the man as I spot his pate is already red raw and hope he’s forgotten the sun cream.
‘Really?’ I bat back neutrally. I should always be prospecting for business, hence the cards nestling by my crotch, but sometimes you don’t want to deal too close to home. Besides this man is a time-waster.

‘Yep. If we get the right price of course.’ He chortles as his cow-faced wife chews on an unaccustomed – by the look of her figure – stick of celery. Everyone will move at the right price, I think sourly, as I mentally run the numbers and know he’ll take it personally.
‘Of course we won’t hold you to it.’ He lies, as his wife nods in agreement, after I’ve tried to obfuscate then generalise.

‘What did you say to them?’ hisses my wife as she joins me clutching a soft drink and I watch a funeral pyre smokestack rising from the antipodean meat crematorium.
‘Just a few home truths.’ I tell her with a chuckle. Ones short-lived, as another pair of tormentors heads my way like wasps to a jam sandwich.

‘So your lot had their arses smacked over that PPI fiasco.’ States another instant expert, several beers and several hurt householders later. No sooner have I extricated myself – banks no longer owning too many estate agencies - than two bores want free advice on how to sell without revealing a boundary dispute.

Head spinning from booze, guts churning from charred meat products, mind numbly adding noughts to values, I feel a hand on my arm. Years ago an urgent: ‘I think I should take you home now’, presaged an evening of adult entertainment.

Now I just want the lie-down.
Posted by secret agent at 6:44 AM

Very funny. But what is your obsession with associating women with cows? Some deeper meaning I fear.

Interesting comment Hotairmail - let me chew the cud on that for a while...
S.A.

Think we were already above Osama, just fewer special forces trying to kill us - although there was that pissy marine who was gazumped....
S.A.