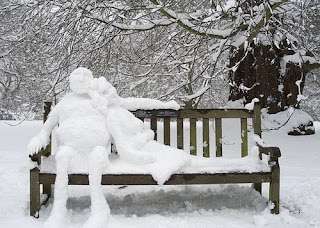 Unaccustomed snow still falling, I inch the car off the drive and feel the wheels spinning wildly. I wave towards the house but can’t see if my wife responds, as the flakes are so thick. Staring ahead through the misty screen, her words of admonishment are still echoing round my head.

‘Nobody else will bother to go in, it’s ridiculous.’ Had been her parting shot, the kiss on the cheek frostier than the weather. My response had been less than gracious, something pompous about responsibilities and setting an example. The puffed-up rhetoric already sticking in my throat by the time I made the main road, several slides towards ditches, only just corrected.

The local radio isn’t helping. A dozy-sounding presenter telling those who might be vacillating to stay indoors listen to his inane twittering and a play list from the 1980’s.

‘Bloody ridiculous.’ I mutter to myself as another travel “expert” advises people to only leave home if their journey is essential. ‘What’s that supposed to mean?’ I grumble loudly, as a mini speeds past me in the virgin snow lane, ignoring the twin tracks near the kerb everyone else is cautiously following. I’m distracted from my solo rant momentarily, as I wonder if it might be one of the slippery snakes from the opposition agent. But as the car disappears into the hypnotic falling flakes I can’t see if the flank is sign-written.

So what exactly constitutes an essential journey? I wonder as I spot the sale board man’s van ahead of me, in the now, almost stationary traffic. He’s self-employed. I’m figuring going to work to earn some money is pretty integral to his day, so the oft-repeated advice to stay inside with a hot drink - and more enticingly but less broadcasted, hot woman - probably doesn’t apply. I certainly can’t spot too many pleasure drivers peering through their snow-swathed windscreens.

‘How mad is this?’ Asks the only other commuter in the car park, a hint of excitement in his voice, as we both exit our warm vehicles cautiously and eye the icy steps towards the park. I nod in agreement, not really wanting to engage in conversation, although the urge to gather up a swiftly assembled snowball and toss it at his exposed bald patch, as he shuffles away, is overwhelming. The child inside dying, but not quite buried.

The park looks virginal. Apart from the just formed footprints of the departed slaphead, the whole expanse has been cleansed by the snowfall. A linen-fresh covering has concealed fallen leaves, discarded cans, unscooped dog turds, and by the look of the ominous corpse-like horizontal snowman shape on one of the benches, at least one homeless sleeper. The Big Issue seller isn’t going to hassle me this morning.

Even the office has a homely Dickensian glow to it, as I slip-slide towards the door, pavement untreated. The timer has switched the display lights back on and the properties are glowing enticingly against the gently falling flakes. If it wasn’t for the temperature - and the asking prices - I’d feel quite warm.

Thirty minutes later my mood has chilled. Three phone calls from staff members claiming localised whiteout conditions in their road, and the heating not wanting to fire up, has underscored my wife’s sage advice to stay at home. Everybody else seems to have. Then the phone rings once more.

‘I didn’t think you’d be there,’ begins the bean counter boss his wheedling voice dispersing any faint seasonal goodwill I might still be harbouring. Why ring then, you twat? I want to scream, but venting verbally in public has to defer to fuming impotently in private. After your student card expires, life is one long junking of principles.

In a bid to get home in one piece, I too tuned in to our local radio station for the travel news. The fella was playing 'Loco in Acapulco' for heavens sake! I thought that these guys had gone in to hiding twenty years ago - trotting out a load of banal waffle to a disinterested audience only showing an interest where it benefits them to do so. Perhaps they'll say that about us lot in time to come, SA? Until then Happy Christmas & a million thanks for your truly excellent blog - sanity in an increasingly mad world.

Thank you Idler - a welcome regular comment maker and I sense a kindred spirit. If you know any publishers with similar good taste who don't just want ghost written celebrity drivel let me know - in the meantime have a great Christmas, too.
Best wishes
S.A.

Blimey Dave the trainee agent is going to love this post!

Merry Christmas to you and here is hoping for a good new year.