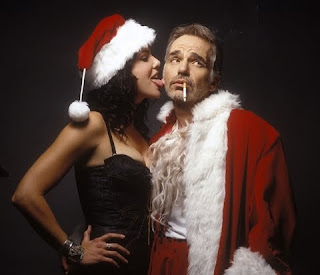 The perennial problem of Christmas raises its head again. Firstly, the do we decorate or not conundrum? I can see the attraction. Somewhere deep inside I remember the thrill of the lights, the anticipation of something special building in the chilled air. But after several decades of flogging homes any questionable belief in the essential goodness of man has been sucked out of me. And lets face it, around here if an bearded intruder with a bulging sack sneaks into your house at night, it’s a safe bet he’s not bringing you surprises unconditionally.

‘Can’t we just have some small decorations this year?’ Pleads negotiator S persuasively. ‘Maybe something understated and classy?’ If I thought it would help flog homes, I’d sit naked draped in tinsel in the window with an illuminated todger, but my reputation is already at an all time low. Now, S, in her underwear would be a different matter, but I’m pretty sure one of the butch killjoy women in human resources would object – unless they got to unwrap her….

‘Anyway,’ I tell her in mitigation. ‘We’re not allowed anything overtly religious in case it might cause offence, so the Nativity scene is a no-no.’
‘Bloody ridiculous,’ scoffs fat mortgage man M as he waddles by, appropriately enough, scoffing. ‘This company is losing the plot.’

‘Is a tree going to upset non-Christians?’ Asks trainee F gormlessly. ‘Who gives a shit if we upset them?’ Snaps M angrily. ‘Nobody likes us anyway, so we might as well go for it and whack a fairy on the top, too.’ A brief discussion about the Brighton office distracts us for five minutes until I have to shut that theme down too. Another missive warned about that after the two negotiators’ civil marriage photographs were maliciously circulated - with those added captions.

‘That new lot have got an twinkly LED light tree in their window.’ Persists S, referring to the latest agent to open in town. Positioned in a tertiary position where a gift shop and children’s clothes shop have both failed in the last three years. ‘That’s all they have that’s interesting in the window.’ I carp back, knowing the few homes they are offering are tired old time-wasters at too much money, or cheapskates who want a cheap fee. I’m hoping they have a bleak mid-winter.

‘Any volunteers for the holiday cover period?’ I ask optimistically, hoping to ride the wave of yuletide spirit. The dead zone between Christmas and New Year is always a grim time to staff the office. The bean-counter boss insists we open but he’s usually checking the statistics on his BlackBerry while on the beach somewhere hot. The atmosphere in the office has turned distinctly frosty, though.

‘It’s waste of time for me.’ Concludes M. ‘Nobody will talk about home loans with their credit cards maxed out.’ ‘I’m going away with my boyfriend.’ Announces lettings tramp B, to raised eyebrows. I didn’t even know she had another man in-tow and the chances are she can’t remember his name. I look in vain towards assistant manager T but he avoids my gaze and polishes his glasses fastidiously. I’m just about to forsake any chance of business and ask trainee F, when S speaks up. ‘I’ll come.’ She says breezily. ‘I’ll be fed up, literally and figuratively by then.’

Not sure how well my wife will take the news that I’m working on New Years Eve, but for once I’m actually looking forward to the holiday period.

I always enjoy your blog. I used to be "corporate" and can empathise with your frustrations. If it's any consolation, it was the same in the business I was in, and that was about as far removed from property as you can get. It's also made me realise it must be the same for most people in large organisations and it wasn't just me! That aside, I thought that was a brilliant post and it bought back some fond? memories.
Hope you enjoy the break.

Very funny. Merry Christmas. Sorry about the New Year though - I don't think there will be much hope for you.

On the up side, you will have plenty of time to carry on with your excellent blog.

I admire your optimism about what you'll be doing during those quiet few days, captured in the picture for this post. Delusional, but admirably so.

The period between Xmas and New Year can be very fruitful - all those stressed out couples deciding to split and sell their main asset.

You should be able to get a couple of Sole Agency deals if the other agents are closed.

land for sale in texas said...

You are a very thoughtful and planned person. From your post, it is really obvious you are a planner no matter what!

Kind - if generic spam words - land for sale in Texas, but I won't be buying any over-priced scrub when we owned it anyway a few hundred years ago.
S.A.

I managed a high street branch of a well-known wine merchant once. In a bid to differentiate ourselves from the rest of the fake-snow and tinsel be-decked shops, I set up a summer theme window, complete with sun sea, sand and a whacking great beach umbrella.

The bollocking I got from head office and the area manager was I suppose predictable. Pity.

How about a full size, blow up, glowing nativity set in your front garden?

Loving the blog, keep up the good work!