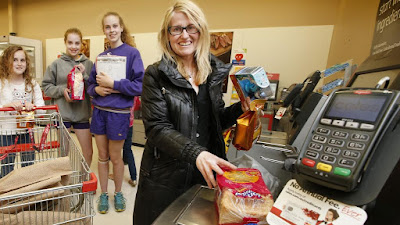 Back in the supermarket on another unwanted errand. This time it’s the German lot that are growing faster then Japanese knotweed. Funny, you win a couple of wars and the losers destroy your car industry, then your high street.

Not that I don’t shop there, obviously, or drive a foreign car. I gave British Leyland enough chances. I finally realised that breaking down at the side of the road in a dated car, poorly bolted together by some bolshie Brummies - while some smug bastard in a cheaper, better, Datsun drove past - had to stop. Like the Austin Allegro, as it happens…

‘See what’s in the middle at Lidl.’ Said my wife gleefully, over the phone. When I first started in this profession I couldn’t be reached, by office or spouse. Still not sure smartphone is the right term, for being on call 24/7/. Seems pretty dumb to me. Now I can get instructions to pick up some item I don’t need, any time.

‘Can’t beat the Germans can you?’ Says a hirsute bloke next to me in the centre aisle. Well you can actually beardy, I think, just not since 1945 - and that one time when Michael Owen scored a hat-trick in Munich.

‘Pretty good value.’ I admit grudgingly as I rummage through cycling tops that appear to be a quarter of the price of one I bought a few weeks ago, and just as thermally efficient, with the same wicking properties. Bloody Krauts.

‘I reckon before long our towns will be full of German discount supermarkets.’ Says the man, chuckling.
‘And coffee shops.’ I add, with jocularity.
‘Or f•••ing estate agents shops.’  Says the man laughing. I frown at him and he looks, as if for the first time, at my business suit.
‘Err, you’re not…..’
Yep I am you whiskery twat and they are offices not shops. A2 planning use for an office, A3 for a restaurant and A1 for retail, you shaggy-haired track-suit bottomed-wearing, ignoramus.

Opportunity to make another friend I don’t want spurned, I move on to collect the items I was told to get. My phone throbs twice in my suit jacket  but I ignore it. Do something old school, like leave a message - or write a postcard.

‘Oh no.’ I mutter when I head for the tills and realise only one is manned. This is where the cost-cutting is. Of course they have the dreaded self-scan tills, my personal bete noire. I look in desperation for a staff member who might open one of the other tills, all with a red lane light illuminated. Nothing. And the three women ahead of me in the queue for green-lit lane two all have vast trollies overspilling with enough goods to support a Calais migrant camp for a fortnight. No wonder they are so fat they need to wear voluminous sports wear. Not that they’ll be jogging anywhere.

‘Unexpected item in bagging area.’ Trills the automated voice, as I can’t decide which side are the scales and which side you put your pre-scanned shopping. Then the two items I’ve been send to collect - of course - refuse to have their barcodes read. Now I’m getting flustered and angry. And needless to say the PA system announces lane two will shortly be opening, just as the red mist descends.

The spotty oik I finally manage to attract, comes across and puts in an over-ride key. Then smugly taps in the barcode manually, the numbers are so small I can’t even read them. Then pleasingly, in a perverse way, he too fails to get the items recognised.

‘I’ll get something else to the same value.’ Says the lad. disappearing. ‘Leave them in the trolley and scan the other items.’

‘There you go.’ Says the employee, having fooled the machine with a citrus-flavoured toilet cleaning product. ‘Just hand this back to me when you go.’ He instructs, leaving me with an oversize lime and lemon polo mint on a backing card, before going to rescue someone else. Flustered I do as instructed as I exit the shop.

It’s only when I get back to the office, that I realise with horror, I walked out without paying.