Dying For The Business - Wednesday 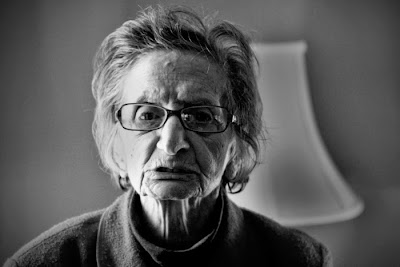 'She can’t cope on her own any longer.’ Says the middle-aged daughter conspiratorially. Her gummy-toothed mother is sitting no more than three foot from me me, in a moth-eaten armchair. I can smell the stale urine and body odour - I really should have spent longer in the shower this morning.

‘Of course she thinks nothing is wrong,’ continues the daughter as her mother rocks back and forth gently and daytime television continues to blast out at an ear-bleeding decibel level. ‘Imagines she is still a housewife and Dad is still alive.’ I’ve seen the upstairs bedrooms, definitely no sign of the old boy, other than the dip in the ancient bed where he lay for five decades.

‘You’re not talking about me are you? Bellows the mouldering mother over, appropriately enough, some property based drivel on homes being auctioned to amateurs whose pension fund isn’t performing.
‘No mum.’ Screams the daughter, before adding slightly less deafeningly. ‘She’s a stubborn old goat, we need to get her into a home.’
She’s in one, I think, unsettling reminders of my own parents’ later days whirring before me like the bad dream they became. I wonder if the other siblings will be bickering about what happens and who does what, in this house?

‘I mean look at the kitchen.’ Grumbles the daughter, as we enter the cluttered space and I curse myself for accepting a cup of tea. I want to spend as long as possible here to grab the business before some other cowboy does, but the thought of drinking from one of the numerous tannin-stained mugs lined up on the filthy drainer, turns my stomach.

‘Oh Mum you’ve been hoarding again.’ Chides the daughter to deaf ears, as she opens an over-stuffed cupboard and I spot boxes and boxes of cakes and slices, all the same type, all no doubt past their sell-by date. ‘She thinks she’s shopping for a whole family still,’ says the daughter ruefully. ‘Dad died ten years ago and my younger sister left in the eighties.’ Time flies when you’re having fun.

‘The garden is a jungle too.’ Complains the daughter as we look out on an overgrown plot. It’s like something from a fairy tale, only I’m pretty sure there’ll be no sleeping princess amongst the thorn bushes - possibly a decomposing pet or too, maybe even the dead Dad if they’re into those eco-burials with the wicker caskets. But no happy ending - unless you’re a developer.

‘There’s a possible building plot.’ I venture, before adding the usual caveats about time-spans, planning issues and up-front costs. I dislike most small-time developers who would love to buy this house. They all want a, cheaper than it should be exclusive deal, expecting you to be favouring them for the promise of future re-sales. I’m acting for the owner, not some slimeball who offers brown envelopes with cash backhanders – plenty of estate agents forget who the client is when sweeteners are involved. I could do with some sweeteners in the murky tea, I think, suppressing a gag.

‘We want her out of here sooner rather than later.’ Says the daughter. ‘I can’t keep coming in and the others say they are too busy and live too far away.’ Been there, done that. They’ll want their share of the proceeds soon enough though, assuming the old girl doesn’t outlive her capital.

‘Who is this?’ Demands the mother angrily, looking at me through rheumy eyes, as if for the first time.
‘The estate agent Mum.’
‘I don’t like estate agents.’
Join the club Grandma.

‘I’m not moving.’ Shouts the old woman towards me, when her daughter leaves the room. I smile and nod neutrally.
‘They’re all just after my money, ungrateful bitches.’ Continues the pensioner, making more sense that she has done so far. She’s possibly right, at least partially. I feel quite righteous only wanting 1.5%.

And then it comes. The old chestnut. She leans towards me. ‘Don’t get old will you, young man.’ Her eyesight is worse that her hearing.
She leans further and I get a waft of death and Dettol. ‘Everyone wants to screw you at my age.’
Ugh, I was thinking specialist housing, not specialist market.

Back in ten days if the pilots stay awake - in the meantime fly high with the absurdly cheap ebook. All formats supported via Amazon.