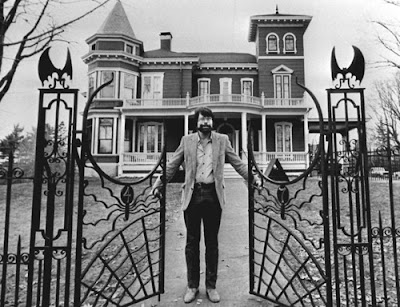 ‘Can you do a viewing on number 21?’ Asks negotiator S as I come through the office door.
‘The dead man’s house?’ I ask, plonking my briefcase down and glancing at the message book.
‘Ugh, I wish you wouldn’t call it that.’ Chides S, pretty face frowning.
‘It’s just a fact.’ I tell her seeing with sinking heart that ‘Bomber’ the surveyor will be valuing a sale we agreed ten days ago. Might as well stick the For Sale board back up, I think glumly. Bomber’s idea of valuing is to find out the agreed price and subtract 10%, to arrive at his valuation.

‘Yes but it’s so creepy to think about what happened there.’ Continues S, as I fantasise about catching Bomber in a loft carrying out a Home Buyer’s Report and snatching away his step-ladder.
‘It’s Bomber’s office on the line boss, has anyone seen him since he surveyed London Road? Only he’s been missing for two days.’
‘Tell them I can’t discuss that over the phone, they’ll have to wait for my written report….’

‘Don’t even think about all that nonsense.’ I tell S coming back to reality. ‘It’s just bricks and mortar and anyway the dead vendors aren’t so fussy about the sale price.’
‘Beneficiaries are though.’ Retorts S. She has a point – two quite prominent ones.

‘Can’t T or F do the viewing anyway?’ I grumble, looking at the office diary and then scanning my inbox. God I yearn for a time, pre-email, when the only disappointment was daily when the postman came, or when you trudged to the Document Exchange box in the nearby lawyer’s office. I see the bean counter boss has sent me three missives in the space of an hour. There’s a man who has never stood on a damp doorstep waiting for viewers who aren’t going to show. He doesn’t even need to push a pen any more – just the Return key.

‘F has the dentist.’ Replies S as a fleeting fantasy involving a large drill and no pain relief for the idiot trainee, flashes through my mind. ‘And T has to visit his Grandmother in hospital later.’
‘I’m sure he’s been to two funerals for dead Grandmothers already.’ I gripe ungraciously.
‘He hasn’t.’ Replies S curtly.
‘What time? I ask throwing in the towel. You need to be resilient in sales but you also need to know when you’re beaten, or you’ll take a lot of unnecessary punishment.
‘Erm, it’s a late one, sorry.’ Says S with a shrug. Not much chance of the owner doing the viewing, short of an unlikely resurrection – particularly as they cremated him.

‘It’s a bit chilly in here.’ Says the woman as I try not to glance at my watch and imagine how incinerated my supper is going to be. Not as toasted as the outgoing owner, but even so…
‘I’ll shut some windows.’ I say, smiling at her and receiving a scowl from her boyfriend in return. Calm down mate, I think, I might want to shaft her but I don’t want sex with the woman.

All the windows I opened on arrival ten minutes before the viewing time, pulled in, smell still lingering in my nostrils, I turn back to the couple. He’s younger than her. Second time round for the lady, divorce proceeds to spend. She is some sort of Cougar; he’s some sort of parasite, suggests the little voice unhelpfully. Don’t judge, just get them to buy it, I answer internally – and stop talking to yourself

‘The sofa set would fit in here easily.’ Says the woman to the sponger, flagging up an Olympic-sized buying signal. The supper can wait. I sense a deal.
‘Can we afford it?’ Asks the man artfully. You mean can her ex-husband? I think.
‘Will they take an offer?’ Asks the lady, smiling at me for the first time.
The ex-owner won’t return my calls, but his bickering children seem keen to get the cash.

‘I’ve got two more viewings tomorrow.’ I answer obliquely. The smile vanishes faster than cake at a Weight Watchers’ Christmas party.
‘You would say that wouldn’t you.’ Sneers the man-boy.
‘We’ll take it.’ Says the decision maker.

Week saved - back from the dead.

-----
How to survive the property market with the ebook on Amazon. Free trial chapters and download for all formats:-

Just wanted to say love your blog, passes away the hours at work! E book ordered, terrific, only wondering how long F will be trainee!!!
Regards H
lifewithadamagedperson.blogspot.com