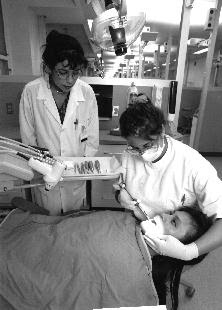 I’m on my way back to the Polish dentist again, teeth deteriorating in tandem with my career. I know I’m going to stick out like a sore thumb in the waiting room once more as the only man in a suit. Last time it felt like the Job Centre Plus-Size, with a motley collection of gap-toothed, overweight, in-bred unemployables all incongruously wearing tracksuits and sports apparel.

It’s early enough, pre-work hours, for the traffic wardens to still be in bed but the memory of my last botched root canal treatment with both hands gripping the dentist’s chair and both eyes on the clock, is still fresh. Staggering out twenty minutes later than calculated with shirt collar bloodied, temporary filling already loosening and a mouth so numb I sounded like Jonathan Ross, wasn’t enhanced by the sight of a dark-suited fascist with a ticket machine, appending the fine to my windscreen.

The, ‘I’ve started so I’ll have to finish,’ conversation wasn’t improved by my lisping vitriol splattering the man in sputum as I raged about a slightly spurious medical emergency. The written appeal didn’t go too well either.

As I approach the meter, headache building, a rotund woman in an ill-advised trouser-suit waddles from one of those not too cleverly named Smart cars, the springs still rocking in protest. She looks slightly like I remember my mother before it all went horribly wrong.

I wait, just stopping short of tapping my foot while she fumbles fin her purse and dithers. I’m now within a minute of being late, something I detest with a passion, even if it’s for a cavity inspection by a dubiously qualified Eastern European with limited English language skills.

‘I’m not sure how long to pay for.’ States the woman, turning to me with an apologetic shrug. I really don’t want small talk and I already have my own small change. I smile neutrally.
‘I’ll do forty minutes.’ She announces. I’m not engaging. I talk to people I don’t want to converse with only on the business clock.

‘It’s scandalous.’ Says the woman as she taps at the ticket machine and somehow manages to get the instructions to scroll across the screen in French. Sacre bleu.
I nod in what I gauge to be a sympathetic manner, as her ticket finally disgorges. My own ticket – can’t claim that back, the bean counter would spot the time imprint – placed in the company car I cross the road to the dentist only to find the same woman going through the door. Terrific.

‘Not the best way to start the day.’ Says my stalker, as she sits next to me. I look at her with a slightly plaque-stained smile and suddenly wonder if she’s flirting with me? It’s an unpleasant realisation given my earlier likening of her, made worse by the fact that an unhelpful inner-voice tells me she’s probably about my age.

‘I’ve had better.’ I tell her neutrally, fiddling with my phone to try and give off a better signal than the cheap Nokia I bought, despite every staff member telling me to get smart - with all-you-can-eat data.

‘What do you do?’ persists the matronly figure in what is now in borderline need of a restraining order. I assume my revelation will get the usual pantomime hiss and lose an admirer, but I’m wrong.

‘Oh I’d love your job.’ Says the woman wistfully. You wouldn’t.
‘I adore looking at houses.’ She continues, as I think, yep you are pretty much a textbook time-waster.
‘I expect you need all sorts of fancy qualifications.’ Trills my new best friend. I tell her the stark truth and she frowns.
‘Really?’
Really.

‘Are you on any daily medication?’ Asks the Warsaw woman, distilled through a white facemask and an equally thick accent. Not yet, I want to say but it’s only a matter of time. She pokes around with that unsettlingly sharp surgical implement, while her mono-browed female assistant fails to operate the suction tube effectively and I wait for a filling to collapse. I’m beginning to pine for my agent-loving admirer who gave me a wonky-smile of encouragement when my name was called. Hmm, she has my name…

Missed the free download period? Still a virtual giveaway at £1.50...